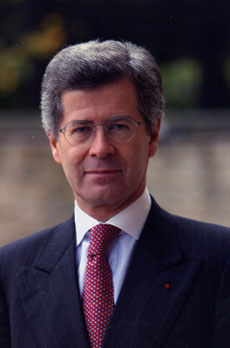 Born in 1946 in the south of France, Ambassador Levitte earned a law degree and is a graduate of Sciences-Po (the renowned Institute for Political Science in Paris) and of the National School of Oriental Languages, where he studied Chinese and Indonesian.

Having successfully passed the Foreign Service exam in 1970, he was first posted in Hong Kong and Beijing in the early 1970’s.

A few months after his election in 1974, President Valery Giscard d’Estaing asked him to work on his staff at the Elysee Palace, where he stayed from 1975 to 1981.

Mr. Levitte was then assigned to his first position in the United States as Second Counselor at the Permanent Mission of France to the United Nations in New York.

Upon returning to Paris, Mr. Levitte was appointed Deputy Assistant Secretary in the African Bureau. He was then assigned as Deputy Chief of Staff to the Foreign Minister, a position he held from 1986 to 1988.

In 1988, he was designated to his first position as Ambassador and served as the French Permanent Representative to the United Nations Office in Geneva from 1988 to 1990.

Returning to Paris in 1990, he held senior positions in the French Foreign Ministry, first as Assistant Secretary for Asia and then as Undersecretary for Cultural and Scientific Cooperation.

After the presidential elections in 1995, President Jacques Chirac asked Ambassador Levitte to be his Senior Diplomatic Adviser. He served in that position from 1995 to 2000.

After serving as Ambassador of France to the United States for four-and-a-half years, he was appointed as President Nicolas Sarkozy’s Diplomatic Adviser and Sherpa (personal representative of the head of state who prepares international summits) on May 16, 2007.

Ambassador Levitte is married to Marie-Cécile Jonas and has two daughters.