Published on December 13, 2014
President of CNES meets with European and American officials from the space industry. 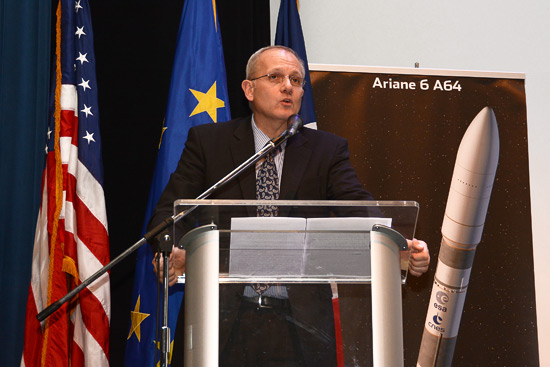 On January 14 and 15, Jean-Yves Le Gall, the President of the Centre National d’Etudes Spatiales (CNES), took part in Industry Day, hosted by the French Embassy in Washington, D.C. Mr. Le Gall was appointed as the President of CNES, the government agency responsible for shaping and implementing France’s space policy in Europe, in 2013.

Numerous members of the space industry community in Washington, D.C. were present at Industry Day, as well as American officials from organizations such as NASA, the Department of State, the Department of Defense, and the National Oceanic and Atmospheric Administration (NOAA). During his visit, Mr. Le Gall had the opportunity to meet with representatives from various European and American scientific organizations, including Ellen Stofan, the chief scientist at NASA. After Ambassador Gérard Araud officially opened the conference, Mr. Le Gall spoke about "The Stakes for 2015" in the space industry. He discussed the achievements of CNES in 2014, which included the initiation of development of the Ariane 6 space launcher and the landing of the Philae lander on the surface of the Rosetta comet. In speaking about the latter achievement, Mr. Le Gall called Rosetta "an international scientific success story."

Mr. Le Gall’s visit affirmed the strong cooperation between CNES and fellow leaders in space exploration, notably the United States—the President noted that CNES has enjoyed a fruitful partnership with NASA for over 50 years now. Looking ahead to 2015, Mr. Le Gall said that climate change will be a top priority for CNES, as Paris prepares to host the COP21 Global Climate Conference in December—"In this regard," Mr. Le Gall noted, "the close ties between Europe and the United States will be crucially important."