This event is organized by La Maison Française - 4101 Reservoir Rd, NW - Washington, D.C. – 20007.
A centennial Commemoration of the United States’ Entrance into WWI 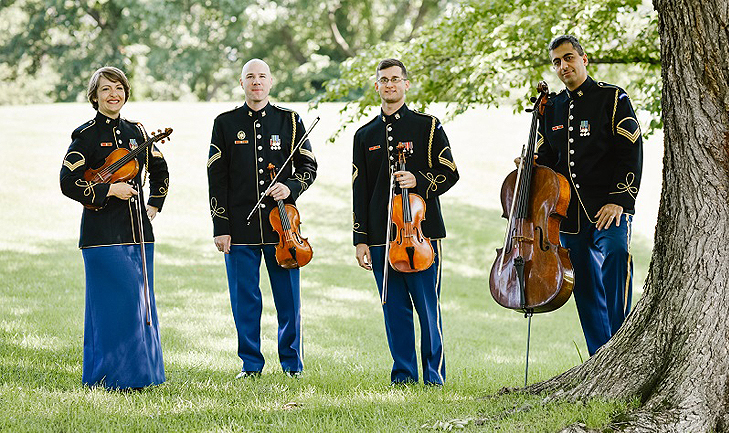 In 1917, the United States entered World War One, joining France and its allies, and fundamentally shifting the balance of the conflict. 1917 would also prove to be a pivotal year in art and culture due, in large part, to an extraordinary exchange of ideas between Europe and America. From jazz to avant-garde art, silent film and modern literature, it was a time of almost unprecedented change and innovation on both sides of the Atlantic. One hundred years after, the French Embassy in the United States sheds light on this momentous occasion through an artistic commemoration of the sacrifice made by the American as well as a celebration of the enduring bond between the United States and France.

On Tuesday, September 12, 2017, the French Embassy will present a unique event featuring two live musical performances by the United States Army Band “Pershing’s Own”, a film screening and a photography exhibition.

The evening will begin with a classical concert by the U.S. Army Strings, performing French and American pieces from the beginning of the 20th century (by Maurice Ravel and Charles Ives). The concert will be followed by the screening of the documentary "America’s Great War 1917-1918”. The evening will continue with the opening of the photo exhibit “Mnémosis” in the presence of the photographer Philippe Bréson, and will conclude with a live jazz performance by the U.S. Army Blues “Swamp Romp”.

The U.S. Army Strings and the US Army Blues are two components of the United States Army Band “Pershing’s Own”, founded in 1922 by Army Chief of Staff General of the Armies John J. “Black Jack” Pershing to emulate European military bands he heard during World War I.

The U.S. Army Strings, a premier ensemble of the U.S. Armed Forces, provide a musical backdrop for many of the country’s most notable events. The elite musicians that comprise this ensemble have been trained at the most prestigious music conservatories and universities in the country. Chamber music is a core element of The U.S. Army Strings’ mission and they will be performing as a quartet. Program: Maurice Ravel, String Quartet in F Major and Charles Ives, String Quartet No. 2.

From the U.S. Army Blues, “Swamp Romp” has delighted audiences across the nation with the joyous sounds of south Louisiana for over twenty years. Formed by Louisiana expatriates Harry Watters (trombone) and Graham Breedlove (trumpet), “Swamp Romp” creates an exciting gumbo of traditional New Orleans jazz, Zydeco and Cajun music, and original compositions.

Through unreleased archives and contemporary footage shot in the archeological digs of World War I’s battlefields, "America’s Great War 1917-1918" tells the heroic and tragic tale of the American soldiers in this terrible conflict. Directed by Stéphane Bégoin and Thomas Marlier. In English.

Mnémosis is the goddess of memory’s name in Greek mythology. It is also the name chosen by the French photographer Philippe Bréson for its unflinching series depicting today’s World War I battlefields where everything is calm now. The woods are silent. The ground rests, finishing the slow digestion of the iron.

Online registration is required for this screening. Register here.

Sign up online on http://frenchculture.org/newsletter to never miss an event by the Cultural Services of the French Embassy in Washington, DC.

“1917” is presented with support from The French Mission du Centenaire de la Première Guerre Mondiale, in charge of the World War One Centenary in France, and is endorsed by The U.S. World War one Centennial Commission. The screening of “America’s Great War” is made possible through a generous grant from TV5Monde and the French-American Cultural Foundation.