Tribute to Paul Bocuse, chef of the century 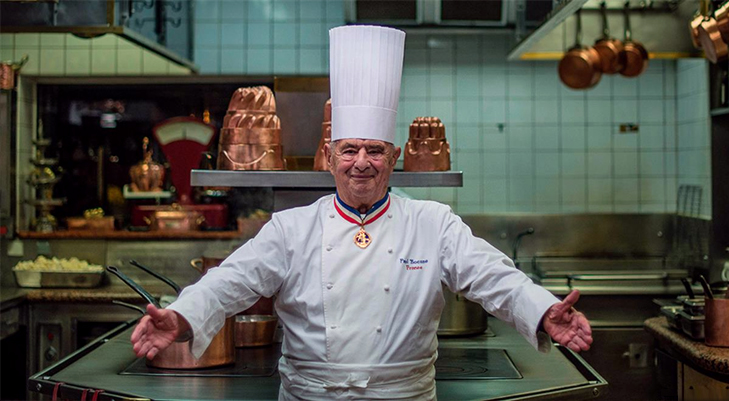 Deemed “the incarnation of French cuisine” by President Macron and widely revered as one of the most influential chefs of our time, Paul Bocuse passed away this year at the age of 91. Following news of his death, American chefs expressed the impact he had on them, both personally and professionally. Fellow chef and Travel Channel host Andrew Zimmern tweeted: “we lost one of the greats with the passing of Paul Bocuse, a vital link to our culinary heritage, and the man who inspired me in 1975 to dedicate my life to what has been my passion.” Anthony Bourdain, chef and host of the popular CNN show Anthony Bourdain: Parts Unknown tweeted: “To have spent time with him was an honor and a dream come true.” Celebrity chef Tom Colicchio wrote: “Chef Bocuse was the giant whose shoulders we all stood on.”

At the heart of his success was his dedication to tradition. Born into a Lyonnaise family of professional cooks, culinary masterpieces were being created in the Bocuse kitchen well before Bocuse became a household name. By the age of 8, under the direction of his grandmother, Bocuse was taught all about the French cooking tradition and the importance of fresh, quality ingredients. By 35, he won the Meilleur Ouvrier de France (Best Craftsman in France) award, which he treasured over every other accolade received in his career.

Bocuse was the first to modernize French cooking during the late ‘60s and early ‘70s with his “nouvelle cuisine”; crafting a style that included fresh ingredients, lighter sauces, and cooking techniques that had never been used. His fusion of flavors and herbs from in and outside of France made his cuisine remarkable. Presentation and prioritizing the customer were the most essential ingredients to a successful restaurant for Bocuse; both became his trademark. As a tribute to his tremendous impact and legacy on international gastronomy, Bocuse was named “chef of the century” by the Gault et Millau French gourmet dining guide in 1989 and again in 2011 by the Culinary Institute of America. The combination of his celebrity, creativity, and the savoir-faire of his technique made his restaurants some of the best in the world.

Among the many restaurants and brasseries that bear the Bocuse name, the most famous is L’Auberge du Pont de Collonges. At this restaurant he made his legendary dish, the black truffle soup VGE named for the former French president, Valéry Giscard d’Estaing, a soup with black truffles and foie gras in chicken broth topped with puff pastry.

The restaurant is unique in France; not only have the menu items remained unchanged for decades, so have the recipes themselves. This establishment has maintained a 3 Michelin star rating since its inception in 1965—an unprecedented achievement paralleled by no other restaurant in the world! Above the restaurant is Bocuse’s bedroom, the room where he was born and where he died.

Bocuse often said, “My biggest change is not having changed anything,” and this statement truly embodies his legacy. Paul Bocuse’s career was built upon the timelessness of his creations. His devotion to homegrown craft and technique will make his work eternal. ◣

Some of Paul Bocuse’s signature dishes.