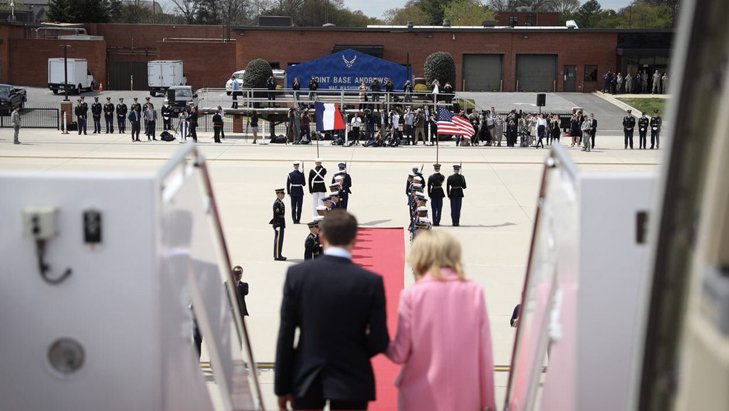 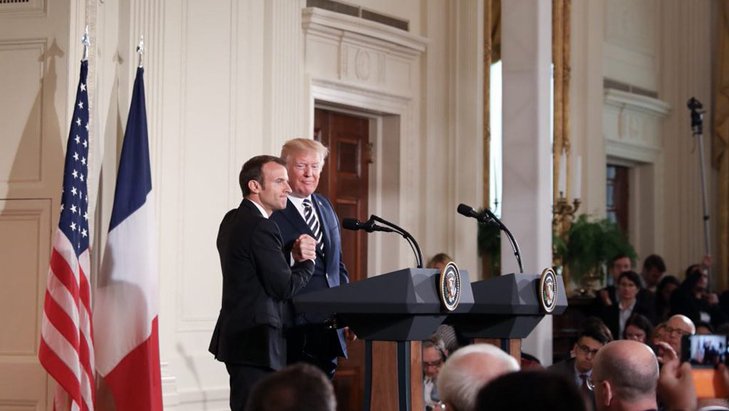 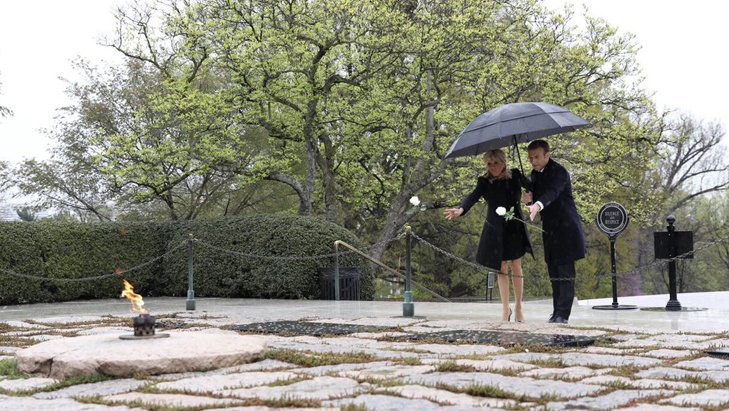 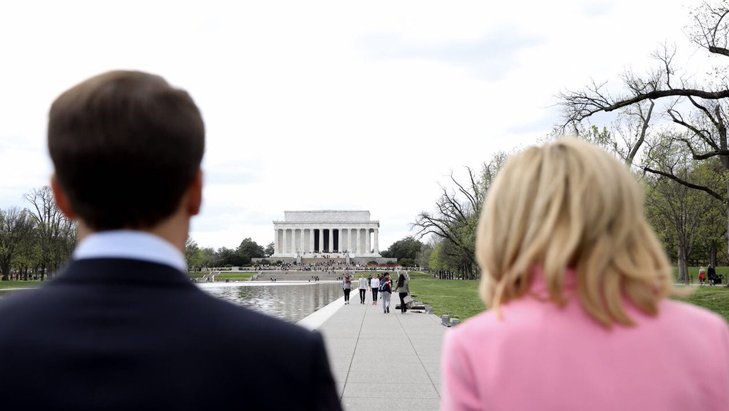 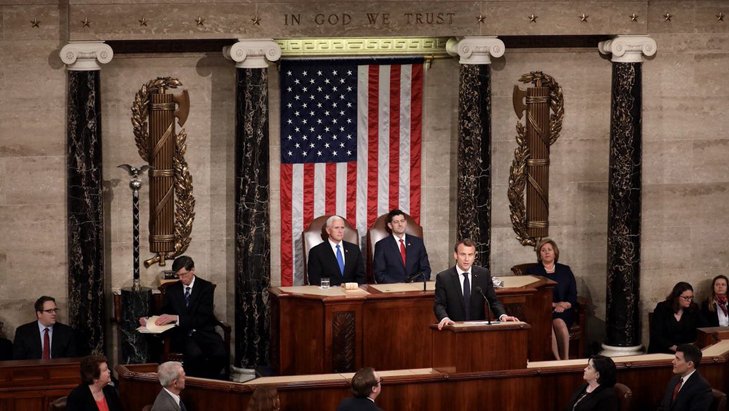 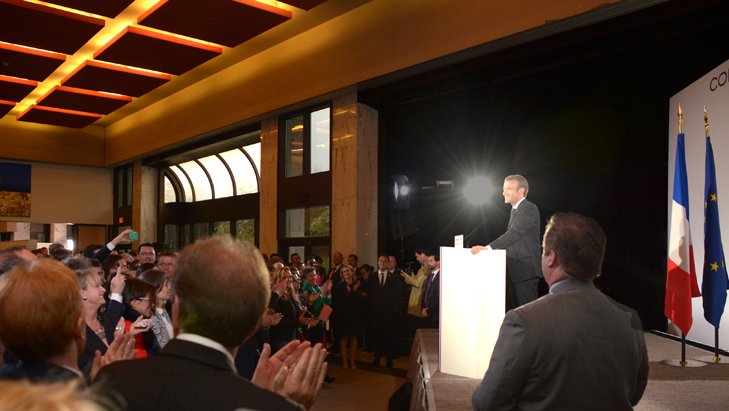 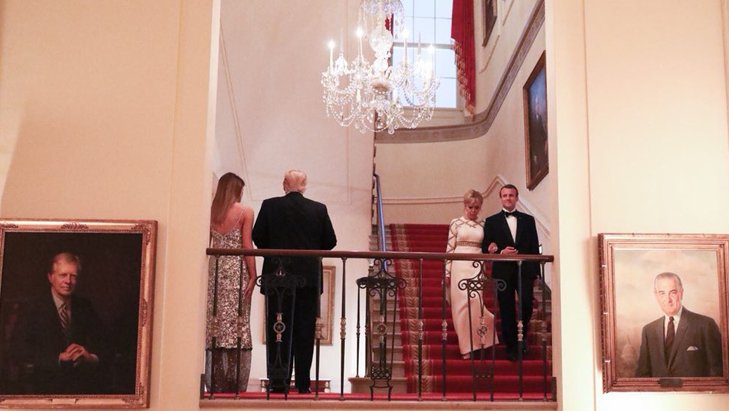 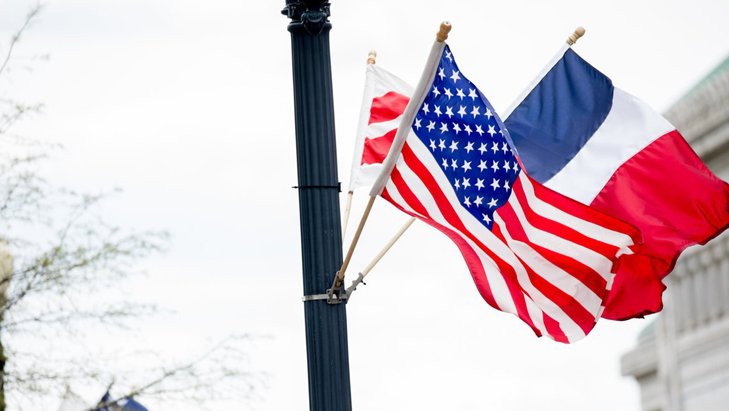 President of France Emmanuel Macron spent three days visiting Washington, D.C. after being invited by U.S. President Trump for the first state visit of a foreign leader under the current administration. President Macron’s packed schedule from April 23-25 included an address to a joint session of Congress, state dinner, a Q&A session with American students, and a variety of speaking engagements in which he addressed issues of great importance to both France and the United States.

Following his arrival at Joint Base Andrews, President Macron and the French delegation traveled to Blair House where they stayed during the visit. Blair House was built in the 1820s, and has been used as an official guesthouse since 1942 when it was purchased by the U.S. government. Next, Presidents Macron and Trump went to the White House for a tree planting ceremony on the South Lawn. The European oak sapling gifted by President Macron came from Belleau Wood, the site of a World War I battle which American soldiers helped to win. After planting the tree, President Macron and Mrs. Brigitte Macron ended the evening with a private dinner hosted at George Washington’s Mount Vernon Estate with President Trump and First Lady Melania Trump.

"At Mount Vernon...we were able to not only have our first exchanges, but also recall the importance of the historical link between our two countries and the deep origins which date back to the revolution” said President Macron at a press conference. 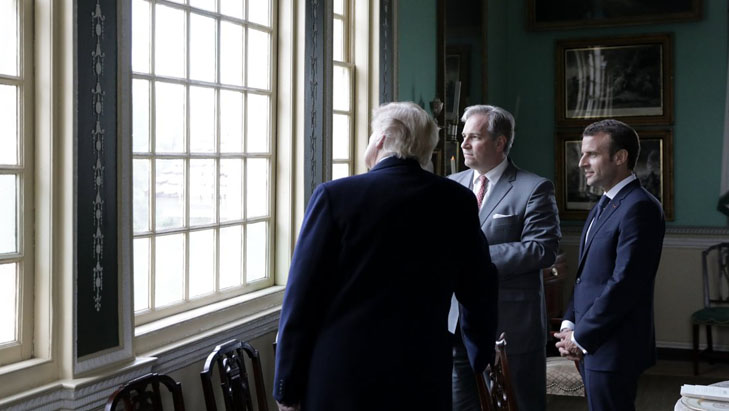 The choice to host the first official meal of the visit at Mount Vernon was a tribute to the shared history of the two nations. In 1784, the Marquis de Lafayette spent ten days visiting his friend George Washington at Mount Vernon during his tour around America. This was just three years after the end of the American Revolution in which he served as a Major General for the Continental Army. The last U.S. President to hold a dinner at Mount Vernon was John F. Kennedy, who hosted President Ayub Khan of Pakistan during a state visit in 1962.

Tuesday morning, the two presidents were able to directly exchange views during a meeting at the White House. The Iran nuclear deal, involvement in Syria, trade agreements and climate change were among the many topics addressed during a joint press conference following the meeting. In addition to matters of policy, President Macron used his remarks as an opportunity to recognize the importance of multilateralism in a troubled world. The President was then invited by Vice President Mike Pence to a luncheon at the State Department, before he traveled to Arlington National Cemetery the Tomb of the Unknown Soldier to honor the sacrifice of men and women in U.S. history who fought and died side by side with French soldiers. He also visited John F. Kennedy’s grave.

President Macron continued to personally honor the contribution of American veterans at a ceremony hosted by the French Embassy. Three American World War II veterans were decorated with the Legion of Honor, the highest French order of merit. One honoree, 94-year-old William Barr, was an airplane mechanic in the Army Air Force who participated in key missions over France and Germany, including the Battle of the Bulge. 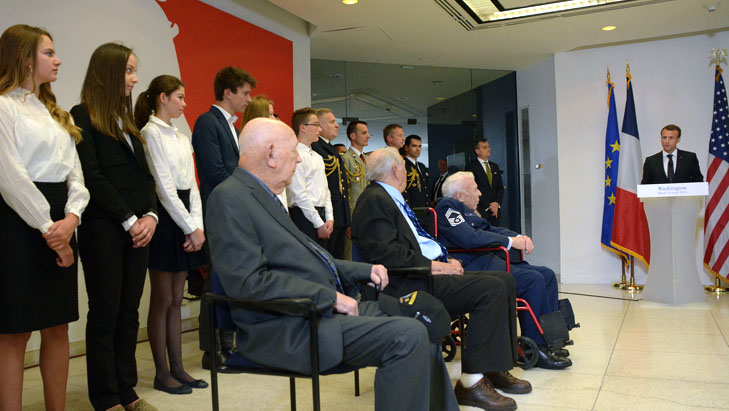 President Macron addresses three WWII veterans, whom he decorated with the Legion of Honor during his visit to Washington.

"Robert, Stanley, William, those are the names of heroes. During World War II, your generation decided to take all the risks to protect France. You fought for freedom. Eternal gratitude from the French people," President Macron tweeted.

Following the ceremony, President Macron addressed the French community at the Embassy’s La Maison Française. In his speech, the President promised to continue transforming the French Republic and carrying the voice of the French people. After greeting those in attendance, the President headed back to the White House for the state dinner.

Alongside the two presidential couples, the guest list for the black tie event included mostly high-level French and American politicians such as House Majority Leader Kevin McCarthy, and French Minister for Europe and Foreign Affairs Jean-Yves Le Drian. The menu for the dinner consisted of seasonal American dishes with French touches including a goat cheese gateau, burnt cipollini soubise, and crème fraîche ice cream. Given the French influence on Louisiana, Jambalaya was also a very apropos addition to the menu. This was the 14th time that the United States has hosted France for a state dinner.

The next morning, April 26, the President’s day began with a visit to the Library of Congress. President Macron and his wife were shown treasures of the library’s collection which hold significance for both France and the United States. During the visit, it was announced that the Library of Congress and the National Library of France would be collaborating to create an online archive of items which highlight the history between the two nations.

’Together we have a substantial collection of materials reflecting the deep historical and cultural connections between France and the United States, as well as materials documenting and celebrating French-American life,’ said Librarian of Congress Carla Hayden in a press release.

The French-American partnerships continued during the visit when French space agency, CNES, and NASA signed a joint declaration for a 10-year agreement on space cooperation. The agreement also includes the establishment of a joint "Epigenetics, Data, Politics" lab at George Washington University.

President Macron then delivered a speech in English before a joint session of Congress, at the invitation of Speaker of the House Paul Ryan. The date of his address coincided with the 58th anniversary of French President Charles de Gaulle’s speech before Congress in 1960. In his speech, President Macron expanded upon many of the same issues as he had during his press conference the previous day, but put a special emphasis on multilateral cooperation.

"We have to shape our common answers to the global threats that we are facing," said President Macron. "The only option then is to strengthen our cooperation. We can build the 21,st century world order... based on a more effective, accountable, and results-oriented multilateralism."

While President Macron addressed Congress, Mrs. Macron paid a visit to the Duke Ellington School of the Arts, located just a few blocks from the French Embassy. The public school offers a dual arts and academic curriculum to talented high schoolers. During her visit, she was treated to music and dance performances by the students.

Following his address to Congress, the President took in the Martin Luther King Jr. memorial accompanied by Congressman John Lewis. Lewis is a longtime civil rights activist who worked alongside Dr. King in the 1960’s to fight for the rights of African-Americans in the United States. Together, the two then walked the streets of D.C. in the Foggy Bottom neighborhood.

President Macron’s next stop was a town hall meeting with students from the George Washington University. At the event, the President took questions from students in the audience about a variety of topics including immigration, antisemitism, Syria, la Francophonie, and more. After enthusiastically engaging with the students, President Macron ended by reiterating his platform on climate change.

"If your generation wants to give the choice to the next generation, you will have to fix the climate change, air pollution, biodiversity and ocean issues… There is no other option, because there is no other planet" said President Macron in his closing statements.

The President’s visit ended with a press conference, during which President Macron reiterated his policy goals, took questions from the media, and thanked President Trump and the First Lady. ◣