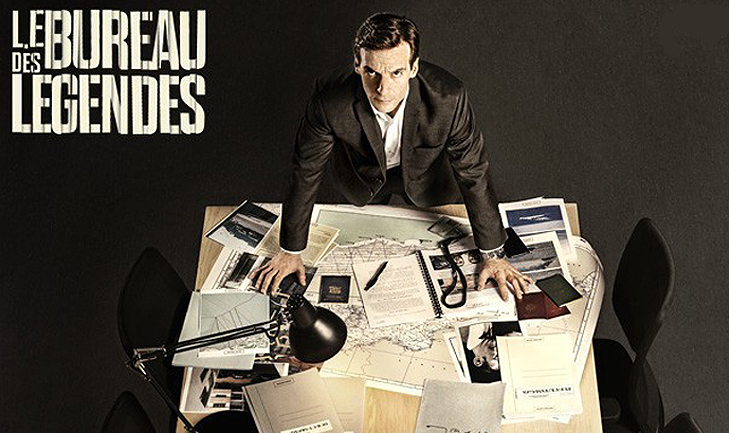 Whether you are enticed by action-packed fiction, or whether you prefer a political drama or a comedy, “Best of French TV Shows” series will guide you through what French TV has best to offer, starting with one of France’s most critically acclaimed spy series, The Bureau (Le Bureau des Légendes),.

As France is excitedlygetting ready for the release of the fourth season of The Bureau (Le Bureau des Légendes), join us for a special screening of the two first episodes of the first season.

Often compared to hit espionage series Homeland and The Americans, The Bureau is based on real-life accounts by former French spies. It revolves around the double lives of undercover agents within the French secret service and its most secret department known as the Bureau of Legends.

The series focuses on French intelligence officer Guillaume "Malotru" Debailly (Matthieu Kassovitz – Amelie, Munich), who returns to the French capital after six years undercover in Syria. He has to face the challenge of returning to ‘normal life.’ Torn between his love and his duties, he has to decide where his priorities lay…

The Bureau invites viewers into the thrilling lives of spies and offers a new perspective on intelligence agencies and geopolitical questions.

The Bureau has had astounding success in the U.S. and abroad, with critical acclaim from The New York Times and Vanity Fair. A CANAL+ CREATION ORIGINALE series created by Éric Rochant and produced by Alex Berger and Éric Rochant for TOP-The Oligarchs Productions, in association with Federation Entertainment.

This screening is presented in partnership with Sundance Now and Kino Lorber.

Sundance Now is AMC Networks’ premium expertly-curated streaming service and features a growing and dynamic selection of award-winning, independent and ground-breaking films, documentaries, originals, and series from around the world. Sundance Now streams ad-free in the US & Canada on the web, iOS, Android, Roku, Apple TV, Chromecast, FireTV, and Xbox One for $6.99/month or $59.99 with an annual membership. To try Sundance Now commitment-free for 7 days, visit www.SundanceNow.com.

With a library of 2,000 titles, Kino Lorber has been a leader in independent art house distribution for 35 years, releasing over 30 films per year theatrically under its Kino Lorber, Kino Classics, Zeitgeist and Alive Mind Cinema banners, including six Academy Award®-nominated films in the last eight years.

In addition, the company brings over 350 titles yearly to the home entertainment and educational markets through physical and digital media releases. With an expanding family of distributed labels, Kino Lorber handles releases in ancillary media for Zeitgeist Films, Carlotta USA, Adopt Films, Raro Video, and others, placing physical titles through all wholesale, retail, and direct to consumer channels as well as direct distribution to all major and many new Digital VOD platforms.

Seasons 1, 2 & 3 of The Bureau are available on Sundance Now and DVD from Kino Lorber at kinolorber.com and at Amazon.com.

All attendees to the June 28 screening will receive a promo code to watch the other episodes of The Bureau on Sundance Now.