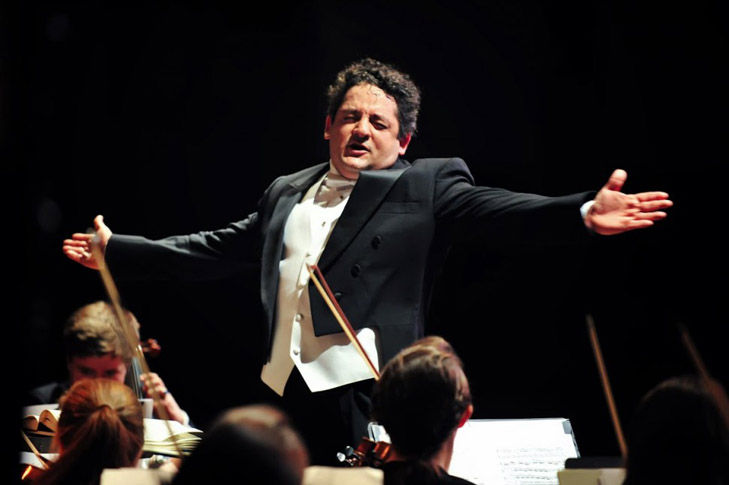 Before coming to the United States in 1995 for graduate studies, Benichou trained at the Marseille Conservatory and the Rueil-Malmaison Conservatory in his native France. He studied harmony and counterpoint with Pierre Doury at the Schola Cantorum in Paris and privately with Yves Cohen. Benichou received a Graduate Performance Diploma from The Peabody Institute and earned a Master’s Degree from Northwestern University. He continued his studies at Yale University.

Precisely coordinated and emotionally expressive, Benichou’s ability to bring a score to life has led to his success in conducting operatic productions. Most recently he conducted L’elisir d’amore at the Residence of the Ambassador to Colombia and La Cenerentola at the Embassy of France as principal conductor of the Washington Opera Society.

With an interest in new music, Benichou has spearheaded commissions, premieres and a recording on the Centaur label. Also a composer, he has received commissions for theater, film and concert music, such as from the Siberian State Symphony in Krasnoyarsk, Russia.

This past December, he made his debut with the New York City Ballet, in Balanchine’s The Nutcracker, and returned to Carnegie Hall, in a music, art and film experience featuring Robert Redford and former Vice-President Al Gore.

What inspired you to become a conductor?

I was inspired to become a conductor mostly by my parents, specifically my mother. When I was born, they already wanted me to be a conductor. It was during high school that the idea of conducting an orchestra started to grow on me, little by little. I began conducting jazz after high school, which made me think "this is really for me." It fit my need for expression, because it is something in which I can express the music; I can act the music; I can move the music; and I can think the music. There are all these parts that are involved intellectually, emotionally, and spiritually. So for me, conducting has always been the right fit.

Could you describe your experience working in the United States?

The United States has excellent orchestras, musicians, training, and music schools. I finished my studies in the U.S., I really enjoyed coming and studying here. The particular thing about American orchestras is the extremely high level of discipline. With an orchestra, that is extremely important. With self-discipline and self-regulation, one can achieve incredible results.

The difference is mostly teacher by teacher, but overall there is a very strong emphasis on pedagogy and psychology in the American education system and a lot of research that goes into how to teach particular subject matters. One of the strong points of the United States is obviously the university-level teaching and the amount of resources. When I went to Yale there was a music library with 700,000 entries, which is unheard of anywhere in Europe. So it is the amount of knowledge that is available and the amount of thinking that goes into how to teach that is just unequaled.

How has France’s rich musical history influenced your career?

When you come from a country, you feel at home in that country, so whenever I deal with Ravel or other French composers, they are always closer to my heart, the language feels very familiar. I have definitely benefited from the American musical life, but culturally I certainly remain a French conductor. Composers from the same country have the same sort of melodic habits that one can find in popular songs or the children’s songs one sings in school. It is cultural affinity, with composers from the country of your childhood that you can find the same closeness. You can do just as good a job conducting Hungarian, American, or Italian music, but the music from your country is the music from your country, and there’s no two ways about it.

As a conductor, how do you communicate your ideas about (or your interpretation of) a piece to the orchestra?

Of course there is the responsibility of managing the group, but certainly the primary relationship is between the conductor and the composer, or the conductor and the piece, and the relationship with the orchestra sort of comes out of that. But communicating with the orchestra, I would say that the clearer my concept is, the clearer my idea of the piece is, then the easier it is to bring it through.

Do you have a favorite piece that you have conducted or hope to conduct?

One piece that I would really like to do is Mahler No. 9, and I am looking forward to doing that in the future. Right now I am conducting the Tombeau de Couperin by Ravel, and I am conducting it this month in Marseille. I’m very excited about this piece. It is one of my staple pieces, one of my signature pieces, and I just love doing it.

Do you have any advice for French conductors? Would you encourage them to pursue careers in the United States?

I would encourage any conductor to get out of his home country. It does not matter if it is the United States or Russia or Italy, but I would encourage everybody to go to a different culture and acquire knowledge of a second or a third culture. It is really through comparison that one can grow, so I would encourage French conductors to do some of their studies in France, but in other countries, as well.  ◣