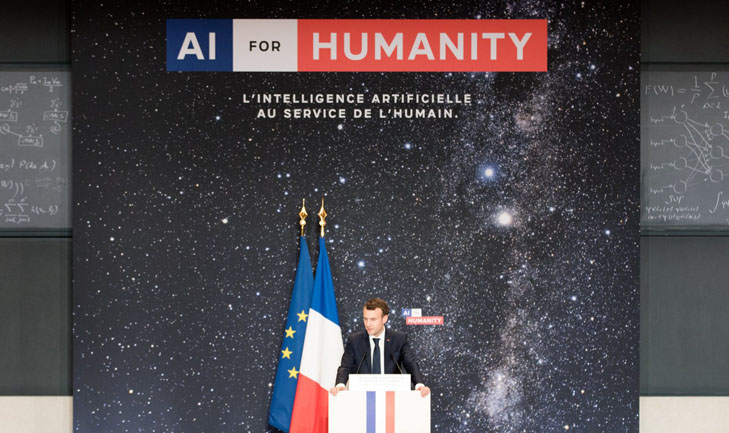 President Emmanuel Macron at the AI for Humanity conference.

In early 2018, President Macron set out his AI strategy, committing France to invest €1.5 billion over the next five years in the industry in order to establish a national research program, encourage startups, and to collect information and statistics. France is forging its reputation as a “start-up nation,” and aims to to compete with the artificial intelligence hegemons of the world, the U.S. and China.

French universities have strong mathematics and computer science programs and as a result, the country has produced several of the senior intelligence agents of Facebook, Google and Samsung. Giants in the tech field are taking notice; Microsoft recently invested $30 million in the construction of Paris’s first AI school, which aims to train 400,000 students in the next three years. Google and Facebook are two other companies who have made significant investments in AI research facilities in France. The government hopes to entice French AI researchers who moved to Silicon Valley to return to France.

France hopes to develop AI sector-specific technology in fields where France has an advantage. One such area is the healthcare industry, where large state-run hospitals provide a source of data that could be used to improve overall health outcomes. For example, using AI, technology could be developed to predict a patient’s future disease, and to find find new treatments and prevention options.