This event is organized by the Embassy of France.
An evening to commemorate the centennial of WWI through a screening of the documentary "Anne Morgan’s War" and a performance of Igor Stravinsky’s "The Soldier’s Tale" by Julien Benichou and the Mid-Atlantic Symphony Orchestra. 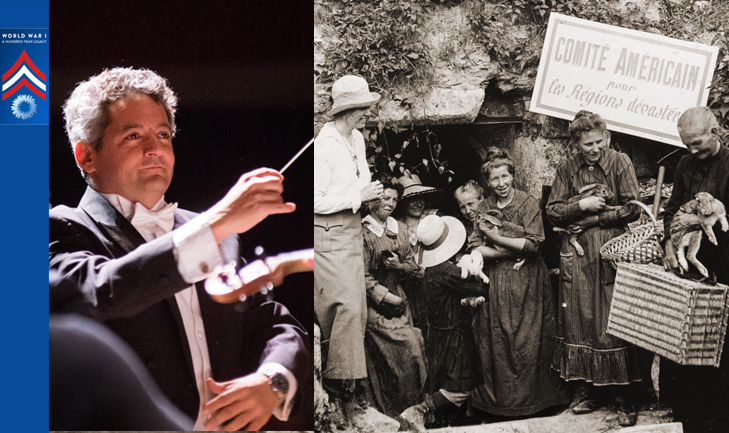 WHAT: WW1 : A Hundred-Year Legacy

From 1917 to 1924 a team of some 350 women, appalled by news of wartime destruction, left comfortable lives at home to volunteer in the devastated regions of France. Their dynamic leader was Anne Morgan (18-73-1952), the wealthy daughter of the late financier Pierpont Morgan. As she rallied potential volunteers and donors on speaking tours across the United State, Morgan harnessed the power of documentary photography and moving pictures to instigate a humanitarian response to the devastation of war. Over a period of seven years under her powerful leadership, 350 American women volunteers went to Picardy, France to help rebuild the region and bring aid to the few French civilians still living there.

This war is sometimes known as the “forgotten war” because it is little known by Americans and yet it changed the world forever. More than 4,000,000 American families sent their sons and daughters to serve in uniform; the casualty rate was far greater than in World War II. A crippling percentage of the French male population was lost, and the civilian population of Picardy was reduced to a fraction of what it had been. The land was devastated, fought over repeatedly by German and Allied forces.

This film documents the life of Miss Morgan and the work of the volunteers, using testimony of volunteers, interviews with historians and a significant amount of archival film from the period. She was one of the first to realize how powerful the latest techniques of photography and film could be in raising awareness along with the funds needed for the work.

It also shows one of the early instances of volunteer humanitarian aid in rebuilding after a disastrous war in an effort completely managed by women.

The film was produced by Flair Production for the French 3rd Channel,which aired it in May 2017. It is presented here in an English language version.

Conductor Ernest Ansermet introduced poet Charles Ferdinand Ramuz to Igor Stravinsky in Switzerland in 1917. That encounter would ultimately lead to one of the most important works of the 20th century: L’Histoire du Soldat (The Soldier’s Tale).

The Soldier’s Tale is the story of a soldier, on leave from the army, who trades his old violin for a magic book that can tell the future and make him rich. He soon discovers, however, that he has made a deal with the devil and that money does not bring happiness.

Program of the evening

Miles Morgan, Great-nephew of Anne Morgan and a Board Member of the American Friends of Blérancourt

1) When do the doors open at the Embassy?

2) What do I need to enter the Embassy?

You will need a valid photo ID

3) Can I park in the Embassy parking lot?

Unfortunately, we are not able to accommodate visitors in the Embassy parking lot. However, there is substantial space to park on the Embassy’s street, Reservoir Road.

4) Are there any items that are not allowed at the Embassy?

Yes. Please be advised that for security reasons, Embassy staff and security services cannot allow large bags or backpacks to be brought onto Embassy grounds. Any large bags will be confiscated at the entrance gate before the owner can be granted entry.

Nothing for this month