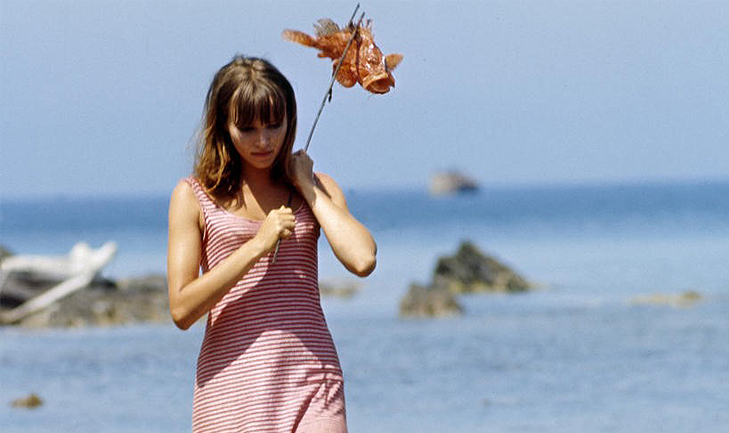 Anna Karina left Denmark at age 18 to pursue a modeling career in Paris. She turned down a supporting role in Breathless, but accepted the lead in Godard’s second feature, Le Petit Soldat. They married the following year and their cinematic collaboration continued with six more features. When not working with Godard, Karina appeared in a variety of other films, including Visconti’s The Stranger, Vadim’s La Ronde, and Jacques Rivette’s controversial La Religieuse (now back in theatres in a new 4K restoration).

In Pierrot Le Fou, her sixth collaboration with Godard, she plays the femme fatale role to its Godardian extreme: murdering, luring, seducing, abandoning, or playing the damsel-in-distress, all contributing to the unraveling sanity of her partner on-the-run, played with effortless cool by Jean-Paul Belmondo. Prefiguring the entire career of Godard, Pierrot Le Fou is probably one of the most visually exuberant films in the French cinema of the Sixties.