This event is organized by Palestine Museum US.
Internationally acclaimed Palestinian musicians blend art, poetry and classical music in a unique performance 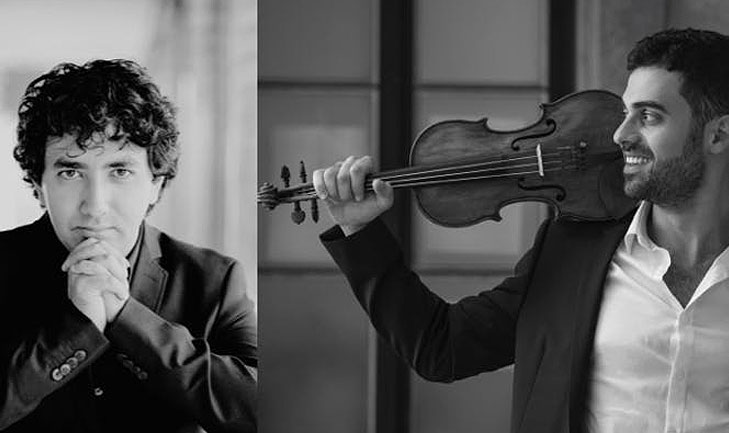 WHAT: Fantasia on Mourid’s Ramallah

ADD. INFOS: Every attendee must be registered under his/her name. Valid ID required. No parking inside the embassy. No large bags, helmets and suitcase.

Karim Said and Hisham Khoury view the classical concert as a platform for musicians to contemplate a particular (and often non-musical) theme, alongside the celebration of works by the great masters of the classical tradition. In Fantasia on Mourid’s Ramallah, Karim Said’s own composition with Arabic & English texts from ‘I Saw Ramallah’ by the Palestinian poet Mourid Barghouti highlight the suffering inflicted on the Palestinian people through decades of war and subsequent exile.

Violinist Hisham Khoury has performed as soloist and chamber musician in concerts and festivals around the world with well-known artists such Daniel Barenboim, Itzhak Perlman and Guy Braunstein. He began his musical studies in Haifa, then in TA University and he completed his Artist Degree at The Barenboim-Said Academy. He has played in prestigious halls such as the Konzerthaus Berlin and RAH in London and he participated in numerous festivals, among them are the Young Artists Program at the National Arts Center in Ottawa and Jerusalem Chamber music festival.

Born in Amman, Jordan in 1988, Karim Said moved to the UK to pursue musical studies at the Purcell School of Music and Royal Academy of Music. Karim’s passion for early and modern music has earned him a reputation for stimulating programming, which led to a debut at the Aldeburgh Festival.

Last year’s highlights include a debut with the European Union Youth Orchestra. Following the success of the orchestra’s first concert series in 2018, it expanded to a chamber orchestra this year. Karim is equally at home performing with actors and in staged musical events. Past events have included collaborative performances at the Brighton Festival, at the Louvre in Paris and most recently at the German National Theatre in Goettingen.