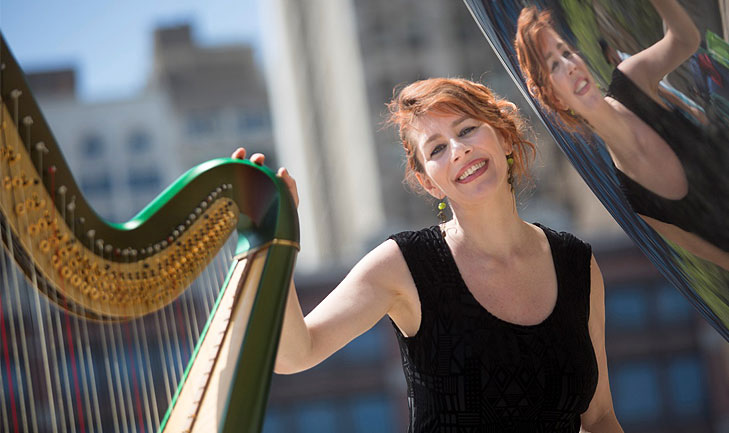 Join the DC Jazz Fest, the Cultural Services of the French Embassy, and the FACE Foundation for a unique concert with the project Olivier Abbassi Sound in Sound . This special event will feature the stunning partnership between French harpist Isabelle Olivier and American Guitarist Rez Abbassi. Immerse yourself in the sweet harmony and mellow rhythm born out of this intriguing combination of guitar and harp.

Harpist and composer, Isabelle Olivier is known in the jazz scene for her fresh and unprecedented musical personality. Her surprising melodies mingled with her unique choice of instrument are at the heart of her very recognizable sound. She has recorded ten albums of her personal work, several works with international musicians such as Peter Erskine and Paul Wertico, and has been solicited by many acclaimed artists, including the famous French film director Agnès Varda.

As one of the most prominent guitarists and composers in today’s jazz music, Rez Abbassi has been voted #1 Rising-Star Guitarist in the 2013 DownBeat Critics Poll and placed in the list of the “Top-Ten Guitarists” every year from 2015 to 2017. Born in Karachi, Pakistan and living in New York for the last 25 years, the award-winning guitarist has created a vivid sound, born out of the startling synthesis of these diverse influences.

It was at a jazz festival in France several years ago that the two artists met, and they later joined forces with the idea of creating a sound-world arising from the union of their instruments. In 2018, the duo received a French-American Jazz Exchange grant from the FACE Foundation and launched the project O.A.S.I.S. Finally, they decided to collaborate on a trio project with the talented Chicago-based drummer Ernie Adams, who has toured and recorded in 49 countries with international vocalists like Diane Reeves, Al Jarreau, and an extensive list of musicians including Stanley Turrentine and James Moody. Drawing on the confluence of cultures, this “ying and yang” aspect of their compositions offers an incredible set of opportunities that push the creative limits of jazz music.

Let yourself be overcome by the surprising harmonies of jazz music with O.A.S.I.S.

The concert will be opened by DCJazzPrix winner, Ernest Turner Trio.

This concert is presented by Events DC, DC Jazz Festival, the Cultural Services of the French Embassy, and FACE Foundation.