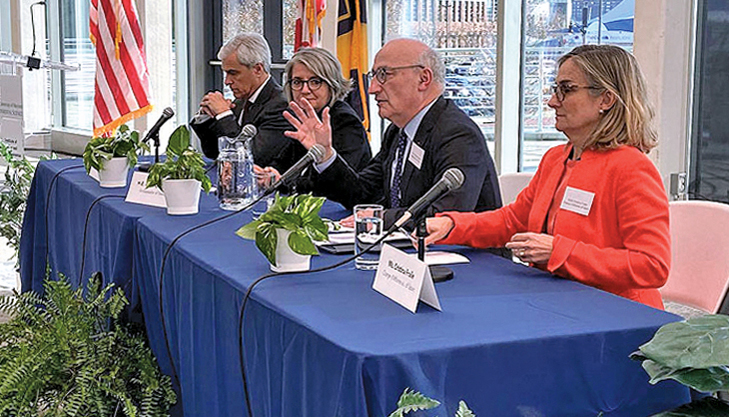 The EU is Maryland’s biggest source of Foreign Direct Investment (FDI). Notable EU companies based in Maryland include Sephora (FR), Kingspan (IRL), Guinness (IRL), Tenax (IT), WedoTechnologies (PT) and Volvo (SW), among many others.

The day followed with a group visit from the Ambassador of France to the U.S., Philippe Etienne along with Ambassadors of Portugal, Spain (CdA), and Sweden to meet with UMCES President Dr.Peter Goodwin and MD Secretary for Natural Resources Jeannie Haddaway Riccio. They held a panel discussion on the topic of "The World’s Response to the Climate Crisis: A Roadmap for the Future" at the IMET (Maryland Institute for Marine and Environmental Technology).

Immediately following their separate talks, the Ambassadors reconvened at Fort McHenry, the historic military fort that protected the port during the British attack in 1814 and which inspired Frances Scott Key to compose The Star Spangled Banner, America’s National Anthem.

For more about the EU’s economic relationship with the State of Maryland, visit http://www.euintheustrade.org/maryland/.