Published on December 12, 2019
A roundtable about the bilateral economic relations between France and the United States (Washington, D.C. - December 11, 2019)

A roundtable discussion organized by the French Caucus on December 11, 2019 attracted Members of Congress, CEOs and senior executives of French/European companies, and French Ambassador Philippe Etienne, to discuss France’s economic footprint in the United States and the 2019 edition of the France-United States Economic Report, prepared by the Economic Department of the Embassy of France in the United States. 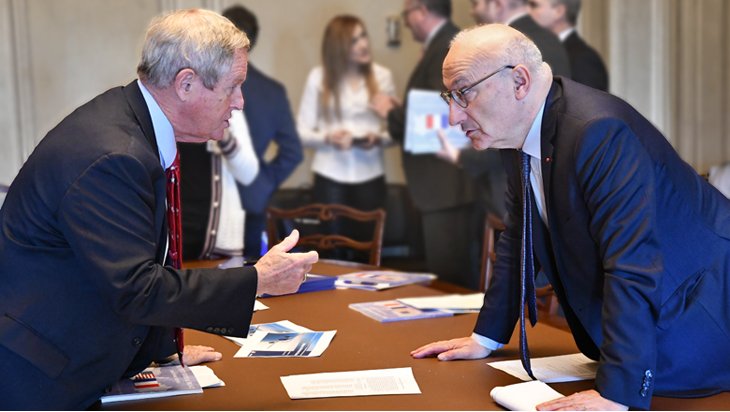 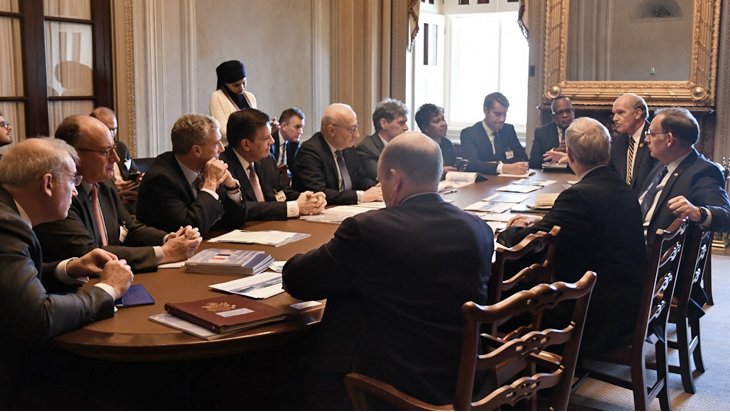 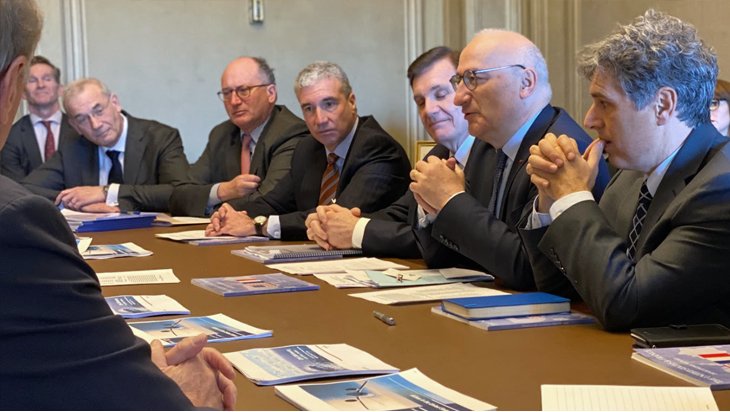 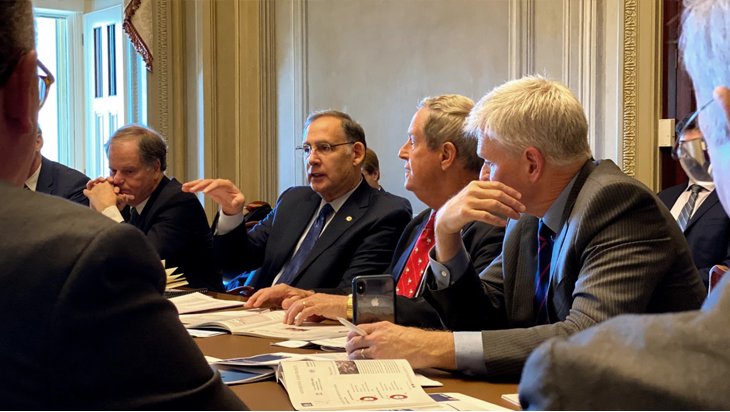 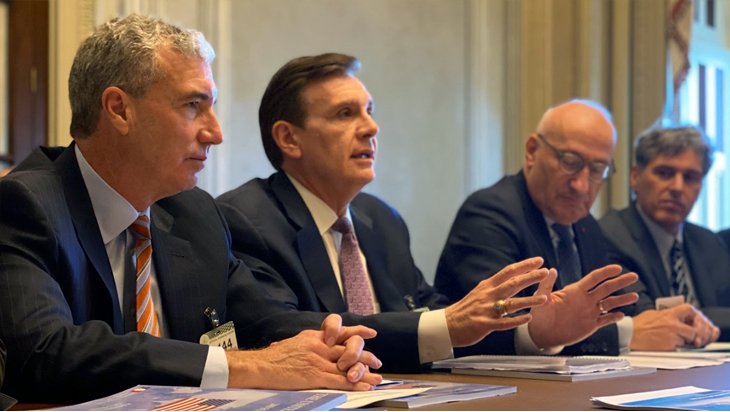 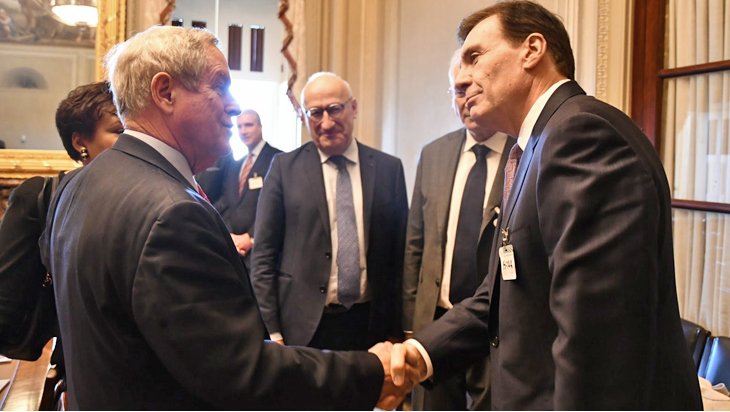 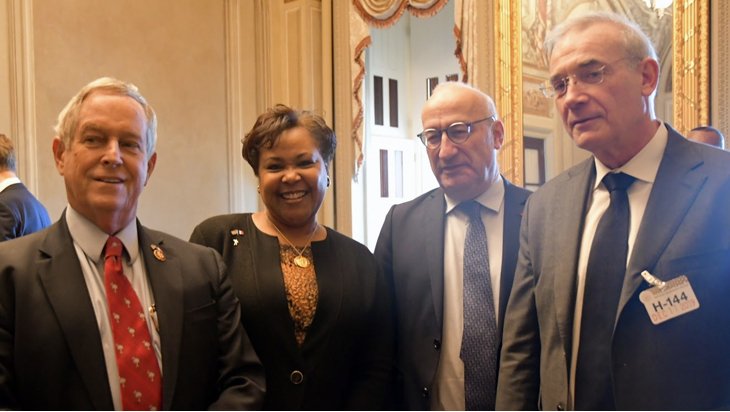 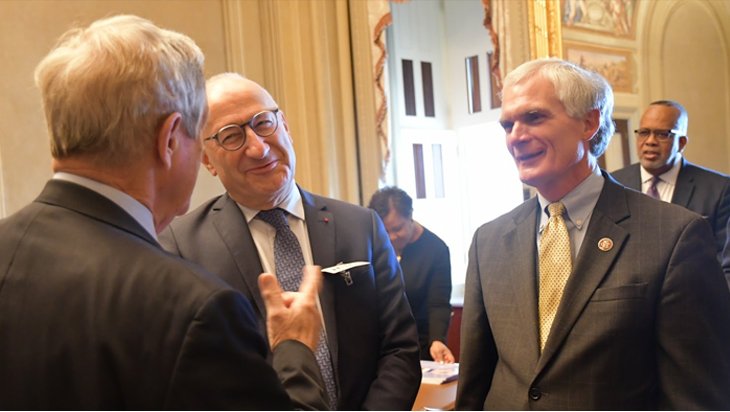 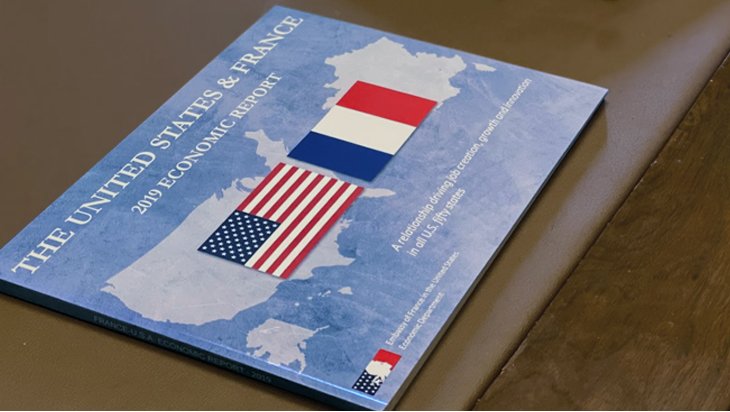 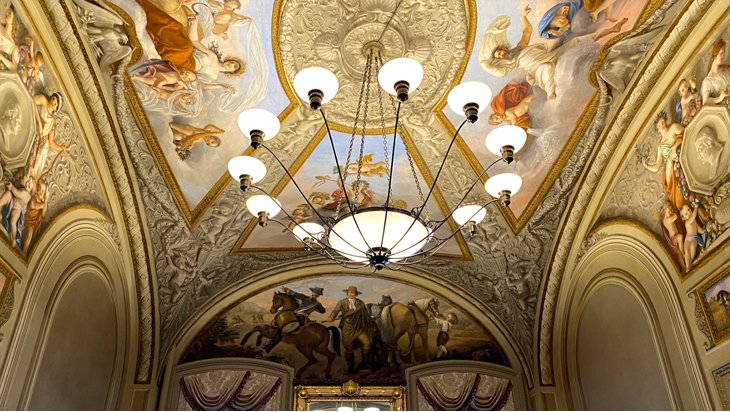 As a Senate Co-Chair of the French Caucus, Senator Christopher Coons from Delaware mentioned that the U.S. and France share a “long, close and trusted relationship in many fields, including trade”, and he called for “more reliable, open and constructive trade relations than ever between our two allied nations” in the context of international tensions. Senator John Boozman from Arkansas, also a Co-Chair of the French Caucus, further emphasized the great representation of French companies in the U.S. and their importance in trade relations and job creation in Arkansas and other U.S. states.

House French Caucus Co-Chairs Congressman Joe Wilson from South Carolina and Congressman Bill Keating of Massachusetts, and Senator Bill Cassidy of Louisiana, further acknowledged the importance of bilateral trade and investment and the impact on the ground of French companies in supporting education, employment and economic growth in their states. They also stressed the importance of a close alignment between democracies in the context of critical challenges related to privacy, intellectual property rights and the development of artificial intelligence. French Caucus member Senator Doug Jones of Alabama, who participated in the roundtable, is a proud supporter of Airbus Americas, which has a $600 million manufacturing facility in Mobile, employing over 1,000 people in Alabama.

The new economic report prepared by the French embassy provides an overview of bilateral trade, foreign direct investment and job creation between France and the United States in 2018. The volume of trade between the two countries represented $129 billion in 2018, an increase of 7% compared with the previous year. More than $400 billion in reciprocal investment was also generated between France and the United States last year. Access state-by-state information by clicking on each icon on the map HERE.

Congressman Bob Latta from Ohio, another House Co-Chair of the French Caucus who attended the roundtable and has been impressed by the value and employment generated by French-American trade, is one of the American political and economic figures cited in the report, stating that [he] “recognize[s] the importance of French companies in bringing quality manufacturing employment, training, and workforce development opportunities throughout the United States and in Ohio.”

During the roundtable, Ambassador Etienne referred to the numerous initiatives taken under the French presidency of the G7 in some of these matters, pointing out that “France is the third largest foreign employer in the U.S., resulting in almost 730,000 direct jobs created through 4,800 subsidiaries of French companies in the U.S.” At the same time, almost 500,000 jobs are generated in France by 4,500 subsidiaries of American firms. After stating that “the French-American economic relations are an illustration of the mutual benefit of preserving and deepening our balanced transatlantic relationship,” the Ambassador invited the CEOs and senior executives from Airbus Americas, American Air Liquide Holdings Inc., CMA-CGM America, Dassault Falcon Jet, Michelin North America, Thales North America and Total—altogether accounting for more than 70,000 jobs in the U.S.—to share their experience on their presence in the U.S.

Founded in 2003, the French Caucus is a bicameral, bipartisan congressional member organization dedicated to promoting partnership and cooperation, and enhancing U.S.–French relations in all fields.