This event is organized by The District of Colombia Society of the Sons of the American Revolution.
The DCSSAR is hosting a Gala to highlight the military alliance between France and the United States and to benefit the Code of Support Foundation and L’Association Terre Fraternité 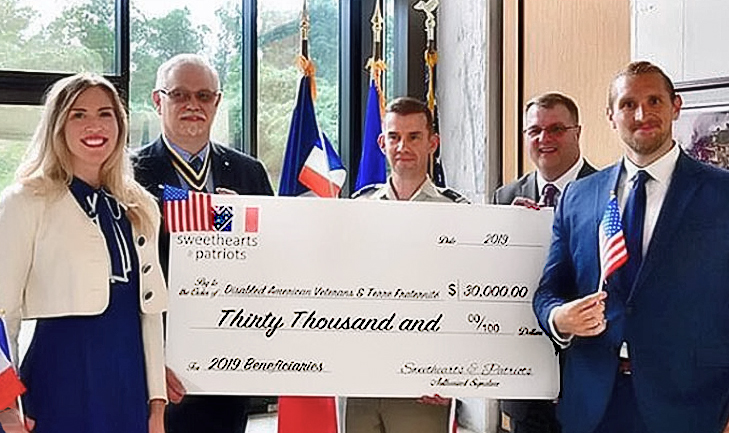 Sweethearts and Patriots Gala began in 2014 as a way to bring together the DC community to benefit organizations that support the military, veterans and their families. Since 2014, annual galas have been attended by 1,200 people and over $100,000 have been raised for six organizations.

This year the 2020 Sweethearts and Patriots Gala will benefit the French organization Terre Fraternité and the American organization Code of Support Foundation.

The Code of Support Foundation was established in 2010 with the goal of bridging the growing divide of understanding and engagement between our military and civilian communities. The Foundation’s team of trained case coordinators and veteran peer navigators provide assistance to struggling service members, veterans and their families as they transition into civilian life.

Following the bombing of the detachment of Bouake (RCI) in November 2004, which left ten dead and 40 wounded, new needs have emerged to relieve the families and the wounded, needs to which the army general Bernard Thorette, head of state -Major Army at that time wanted to answer.

Under his leadership was born in 2005 L’Association Terre Fraternité which aims to support the wounded in service of the army, their family and the families of dead soldiers in use. In doing so, its statutes do not prohibit it from carrying out general mutual aid actions. Terre Fraternité lives by donations and does not receive any public subsidy which leaves it great autonomy.

The DCSSAR is a nonprofit, non-political volunteer service organization dedicated to education preserving American history and promoting patriotism. Its volunteer efforts focused on helping veterans and their families are a high priority of DCSSAR members.

Your generosity will assist these organizations in accomplishing their worthy missions.

Additional Gala information can be viewed online at https://www.sweetheartsandpatriots.org/