Nuclear energy is the cornerstone of french energy policy. In the ‘70s France chose to develop nuclear as its base load electricity source as a response to the oil crisis and assure its energy independence.

Nuclear Electricity Production: France currently counts 58 commercial nuclear reactors in operation responsible for producing 80% of French domestic electricity. As a comparison, the 104 US reactors produces 20% of US electricity.Despite scarce natural resources, France has reached an energy independence of 50% thanks to its strategic choice for nuclear energy. 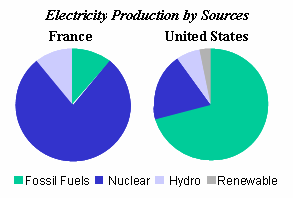 International Cooperation and research: France is one of the forerunner in nuclear research and participates in numerous international cooperation programs alongside the United States such as the development of the next generation of nuclear power plants (Gen IV) and the International Thermonuclear Experimental Reactor (ITER) that will be built in Cadarache, South of France.

The French Atomic Energy Commission is a public body established in October 1945 by General de Gaulle. It constitutes a power of expertise and proposition for the authorities. A leader in research, development and innovation, the CEA is involved in three main fields:

It develops and acquires the technological building blocks necessary to the development of the nuclear reactors of the future (Contribution to Generation IV and GNEP research),

It tackles micro and nano-technologies for telecommunication and nuclear medicine for radiotherapy and medical imaging,

It shares its knowledge and know-how through education and training through the National Institute for Nuclear Sciences and Technologies (INSTN),

It manages over 300 priority patents and is active in the creation of clusters.

It conceives, builds, maintains then dismantles the nuclear warhead of the French deterrence force,

It helps to fight against nuclear, biological and chemical weapons (NRBC program).

The missions of the CEA are similar to the Department of Energy in the United States. The CEA has a network of counselor or representatives in French Embassies around the world (see joint map). 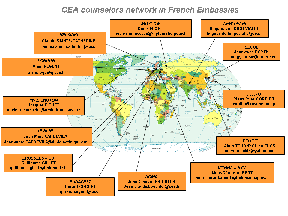 Created in 2006, from the former DSIN (Directorate for the Safety of Nuclear Facilities), the French Nuclear Safety Authority is an independent administrative authority which is tasked with regulating nuclear safety and radiation protection in order to protect workers, patients, the public and the environment from the risks involved in nuclear activities. It also contributes to informing the public. Like the Nuclear Regulatory Commission in the United States, it carries out inspections and may pronounce sanctions, up to and including suspension of operation of an installation.

Created in 2001 by merging the Protection and Nuclear Safety Institute (IPSN) and the Ionizing radiations Protection Office (OPRI), the Institute for Radioprotection and Nuclear Safety is a public establishment of an industrial and commercial nature placed under the joint authority of the Ministries of the Environment, Health, Industry, Research and Defense. It is the expert in safety research and specialized assessments into nuclear and radiological risk serving public authorities whose work is complementary to the ASN.

Its scope of activities includes:

research on the prevention of major accidents,

Created in 1991, the French National Agency for Radioactive Waste Management is a public industrial and commercial organization that operates independently of waste producers. It is responsible for the long-term management of radioactive waste produced in France under the supervision of the French Ministries for Energy, Research and the Environment. It can be compared to a certain extent to the Office for Nuclear Waste of the Department of Energy in the United States.

Andra also pursues industrial, research, and information activities as it designs and implements disposal solutions suited to each category of radioactive waste:

specification of waste packages for disposal,

research programs for long-lived and high level activity waste, especially through the operation of an underground research laboratory in a deep clay formation…

The General Directorate for Energy and Climate represents the government and is part of the Office of the Department for Ecology and Sustainable Development. It defines the French nuclear policy. The DGEC takes care of the energy supply, the security of supply, oil refining and logistics, nuclear industry, and coal and mines.

Consequently, its activities include:

the design and implement energy and raw material supply policy,

to ensure opening of electricity and gas markets,

to oversee enterprises and public institutions in energy sector,

to ensure compliance with rules and regulations governing energy sector,

to participate in European and international energy projects and working groups,

to provide economic, environmental, and fiscal expertise on energy matters.