The Swallows of Kaboul 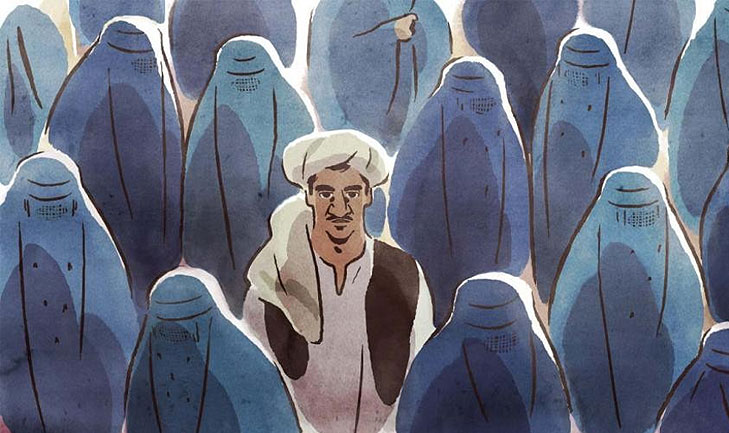 WHAT: The Swallows of Kaboul

In French with English subtitles

The Swallow of Kabul (Les Hirondelles de Kaboul) follows the story of two couples during the Summer 1998. In 1998, Kabul in ruins is occupied by the Taliban. Mohsen (voiced by Swann Arlaud) and Zunaira (voiced by Zita Hanrot) are still young and in love. They remain hopeful that they will once again be able to live as they choose in their beloved country. In contrast, the despair-filled prison warden Atiq and his terminally-ill wife Mussarat live as if they are already dead. They have been married for many years and are hardly ever talking to each other. Stoic war veteran Atiq has seen too much horror in his life and is unable to express to his wife how much she means to him. A foolish act of Mohsen will tip the fate of his couple into tragedy.

Graphically rich, 2D watercolor-style animation The Swallows Of Kabul provides an involving adaptation of the Algerian writer Yasmina Khadra’s literary fiction. The movie is a moving testimony of life under Taliban control in the Afghan capital, highlighting a dangerous act of humanity during a violent time via the stories of those two couples whose fates become intertwined through death, imprisonment and self-sacrifice.

Two female directors have co-signed this involving adaptation of Yasmina Khadra’s novel. Eléa Gobbé-Mévellec, who is also responsible for the overall character and graphic design, earned her stripes as an animator on popular French features. Zabou Breitman, who is also a popular actress and director of television and theater, is at her fifth feature as director.

The swallows of Kabul was screened in the Un Certain Regard section at the 2019 Cannes Film Festival. It won the best film award at the Angoulême Francophone Film Festival.The film was also nominated at the Annecy’s International Film Festival of Animated Movies in 2019.