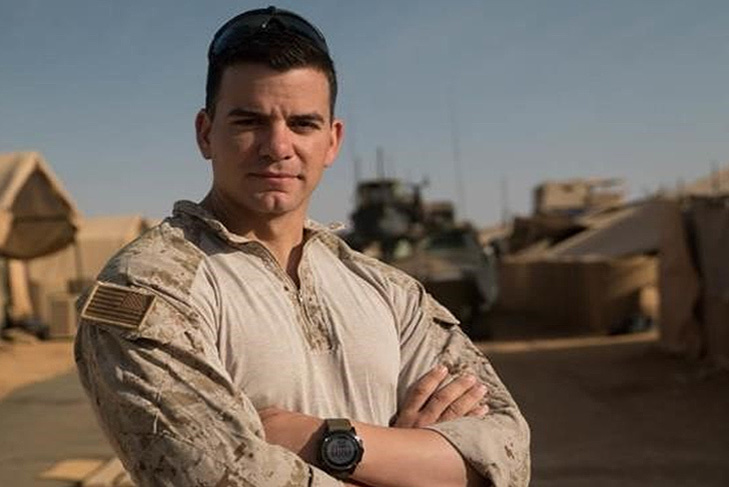 "I came to France for two years as part of an exchange between the U.S. marine corps (USMC) and the 6th French light armored brigade, "said Major Philip. "It is a chance for me to be here with Operation Barkhane and even more to participate in the operation with the unit of the Foreign Legion that welcomes me daily in France."

At 36, this makes him the first American to be deployed in Operation Barkhane as part of a desert battle group. Assuming the function of S35 (planning officer), he assists the chief of staff of the group and its chief of operations in the planning of actions carried out in the field. "I live a rather unique experience, very rare, with a lot of responsibilities” he says with a smile. "I find that being in “opex” (exterior operation) with my legion friends is an extraordinary way of knowing the French army in its truest form, in operation."

For this American with impeccable French thanks to a childhood spent in Belgium and a French-speaking mother, his insertion in the heart of a French operational center allows him to be confronted with other procedures. "Professionally I learn a lot from what I see and especially from the way you approach problems that Americans or French may encounter in operation."

In these rustic living conditions, Major Philip feels particularly comfortable. "I was joking this morning with the chief of operations telling him that I felt at home here, "he says with a smile. "The USMC is often sent in the opening phase of a theater before the US Army, canvas tents and basic comfort I know it all well. But the soldier’s paradox is that it is often in these harsh conditions that cohesion is the strongest!"

From his experience as a staff officer in Operation Barkhane, Major Philip already has strong recollections. "For me, the projection of the group’s operation center on the ground was a significant moment, seeing in real time the planning to which I had contributed unfold as we had worked it out collectively."

At a time when interoperability between allied armed forces is essential, the type of exchange in which the major Philip participates matters particularly. "It is extremely beneficial between partner countries to practice this kind of exchange. Interoperability is just a word, but the important thing is to put it into practice at the tactical level. I think it is essential to have foreign officers inserted in both sides to really learn the decision-making process."

Led by the French armed forces, in partnership with the “G5 Sahel” countries, Operation Barkhane was launched on August 1, 2014. It is established on a strategic approach based on a logic of partnership with the main countries of the Sahel-Saharan band (SSB): Burkina-Faso, Mali, Mauritania, Niger, and Chad. It includes around 5,100 soldiers whose mission is to fight against armed terrorist groups and to support the armed forces of partner countries so that they can tackle this threat.