The International Coalition for the Sahel

The International Coalition for the Sahel was launched during the Pau Summit of January 13, 2020, by the Heads of State of France, Burkina Faso, Mali, Mauritania, Niger and Chad, in the presence of the United Nations Secretary-General, the President of the European Council, the European Union High Representative, the Chairperson of the African Union Commission and the Secretary General of La Francophonie. 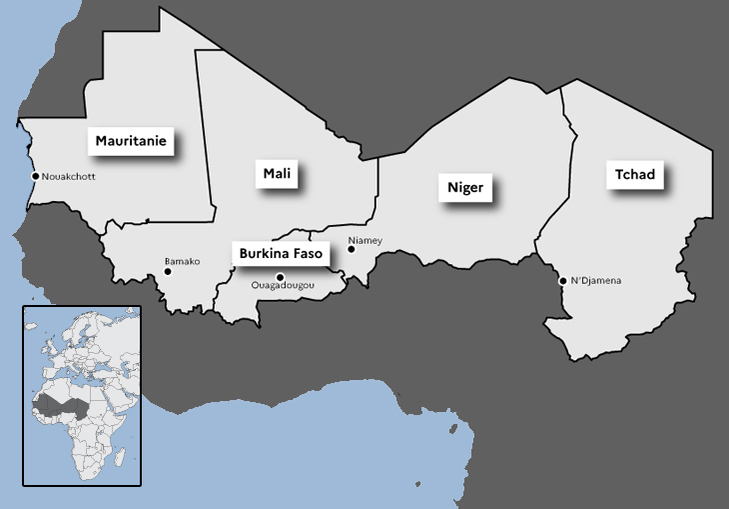 Providing a more collective and inclusive response to the Sahel crisis

The seriousness of the crisis in the Sahel, the urgent need to act and the scale of the needs require a stronger, more inclusive response. This is the goal of the International Coalition for the Sahel. The aim is to adopt a more collective response to the challenges in the Sahel region by bringing together the actions carried out by G5 Sahel States and their international partners. Together they form a community of shared interests in accordance with the values and standards of the United Nations. The Coalition is not a substitute for existing decision-making processes.

The International Coalition for the Sahel aims to facilitate coordination and interaction between the various dimensions of international action to support the G5 countries. The aim is to ensure coherent action at the regional level, encompassing all levers and actors involved in the Sahel, including on military, security, political and development issues.

Extract from the joint statement by the Heads of State, January 13, 2020, Pau Summit:
"[…] this joint action is aimed at protecting civilians, defending the sovereignty of the G5 Sahel states […], preventing the terrorist threat from spreading into bordering countries – the goal being to restore stability, the essential precondition for development.”

During their meeting held on April 27, 2020, via videoconference, Foreign and Defense Ministers from the G5 Sahel countries and from France welcomed the establishment of the Coalition for the Sahel. In the following video, Special Envoy of France for the Sahel Christophe Bigot explains what the Coalition is about:

A Coalition based on 4 complementary pillars

In the context of a poor security and humanitarian situation, this initiative offers a new framework for international action, across four complementary pillars which are each steered independently.

The aim is to fight against armed terrorist groups by coordinating all of the efforts led by the African armies and the G5 Sahel Joint Force with the partners – Barkhane, MINUSMA, Takuba Task Force – with priority given to the Three-Borders region (Mali, Niger, Burkina Faso). Faced with a poor security situation and the possibility of the threat expanding beyond the borders of the G5 Sahel countries, the aim is to create the conditions required for stabilization and development work.

Learn more about the work carried out by certain actors to fight against terrorism in the Sahel:

◢ PILLAR 2: Building the capacities of the armed forces of States in the region

The Partnership for Security and Stability in the Sahel (P3S), initiated by France and Germany during the G7 Summit in Biarritz in August 2019, aims to identify security needs and increase efforts in the fields of defence and internal security.

Within the framework of the P3S, the Coalition’s second pillar aims to coordinate all the defense capacity building actions for G5 countries, and in particular all of the offers of training and equipment for national armed forces and the G5 Sahel Joint Force, including armed forces responsible for police missions.

The European Union is supporting the G5 Sahel, particularly through the “African Peace Facility” and the EUTM Mali military training and strategic advice mission (whose mandate has been renewed for four years beyond May 18, 2020). The EUTM Mali strategic review enabled a strengthening of the mandate and a geographical expansion of the mission in Burkina Faso and Niger.

◢ PILLAR 3: Supporting the return of the State and administrations in the territory

In the framework of the effort to identify the priority needs of the Partnership for Security and Stability in the Sahel (P3S), this pillar aims to coordinate all available training and equipment for national internal security forces (police, gendarmerie, national guard) and the G5 Sahel Joint Force’s provost marshals. The aim is to help bolster the sovereign function of the State. Enhancing the State’s presence also entails rebuilding the legal capacities and local administration of the G5 countries, with priority for the most fragile areas.

Development assistance is currently coordinated through two main bodies: the G5 Sahel, a cooperation framework created in 2014, and the Sahel Alliance, launched on July 13, 2017 by France, Germany and the European Union.

The fourth pillar aims to respond to challenges regarding employment, poverty, education, healthcare and infrastructure in Burkina Faso, Mali, Mauritania, Niger and Chad.

These contributions are spearheaded by the Sahel Alliance (23 members including 10 observer members; over 800 projects totaling €11.7 billion), in collaboration with the G5 Sahel Executive Secretariat. The Executive Secretariat is helping to identify activities, ensure good coordination between actions and distribute roles and/or geographical areas. It therefore guarantees the overall effectiveness of development work, in coherence with the political, security and military aspects.

The aim of this pillar is also to support the return of government services and decentralization, so as to build confidence between public authorities and local people.

Find out more about the Sahel Alliance

France proposed supporting the momentum for increased coordination and mobilization of partners by running the Secretariat of the International Coalition for the Sahel for six months from February 1, 2020.

The body is composed of representatives of the Ministry for Europe and Foreign Affairs, the Ministry for the Armed Forces and the Agence Française de Développement and is placed under the authority of the Christophe Bigot, General Secretary. As such, the body will take on a more international dimension in the future.

It is open to contribution from partners of the Sahel Coalition and the G5 Sahel who wish to support its work through seconded staff. Several countries from Europe and the G5 Sahel have shown that they are keen to play a part in this.

Operational contacts have been made with the G5 Sahel Executive Secretariat, ECOWAS as well as the European Union and the G5 Sahel partner States with a view to enabling the Coalition to meet its goals.

The Secretariat’s mission is to run the coordination between the partners, provide coherence within and between each of the four pillars and to monitor the results.

The Coalition in action

The sixth ordinary summit of the G5 Sahel was held on February 25 2020 in Nouakchott, in the presence of G5 Heads of State. The Secretariat of the G5 Sahel, renamed the “executive secretariat”, reaffirmed its commitment to consolidating cooperation in the field of fighting against terrorism and continuing joint military efforts.

The first Sahel Alliance General Assembly, which was held in parallel with this summit, was chaired by the French Minister for Europe and Foreign Affairs, Jean-Yves Le Drian. This General Assembly was an opportunity to mobilize the international community around joint commitments for development in the Sahel region.

The Sahel Alliance committed to taking action first and foremost in the most fragile areas of the Sahel region, to working towards better coordination between the security and development pillars and enhancing the coordination and flexibility of the methods of intervention.

The General Assembly of the Sahel Alliance was an opportunity for partners mobilized for the Sahel region to adopt the principle of an integrated territorial approach to coordinate, ensure coherence and where necessary concentrate efforts in priority areas. The aim is to start with a joint identification of fragile areas and areas in crisis and define joint or shared objectives through and for the actors in the 4 pillars.

Find out more about the G5 and the Sahel Alliance

The Takuba Task Force was launched on 27 March 2020. Some 11 European States, together with Mali and Niger, adopted the political declaration creating this force which will be brought under the command of Operation Barkhane with a view to fighting terrorist groups in the Liptako region on the border between Mali and Niger. The Task Force will mainly be composed of European special forces. It will also provide backing in the form of advice, assistance and support for Mali’s armed forces in coordination with G5 Sahel partners, the United Nations Multidimensional Integrated Stabilization Mission in Mali (MINUSMA) and the European Union’s civilian and military missions (EUTM Mali, EUCAP Mali and EUCAP Niger).

Other examples of progress on the ground

◢ From March 3 to 23, 2020, the Barkhane force, together with the armed forces of Mali (FAMa) and Niger (FAN), carried out Operation MONCLAR in the Liptako region on the border between Mali and Niger. This operation fell under a larger operation carried out by the G5 Sahel Joint Force, involved in Operation SAMA with the support of MINUSMA. This joint operation, which saw unprecedented numbers of troops involved, helped achieve very significant results.

◢ The Barkhane force’s support also led to a significant donation of school equipment to Chad on March 17, 2020. In late March 2020, the French State, through the Security and Defense Cooperation Directorate, also handed over technical equipment to Chad to support operations currently led by the President of Chad against armed terrorist groups. Mali has also received several training courses and equipment donations.

◢ MINUSMA is continuing to work to protect civilians in the central and northern regions of Mali.