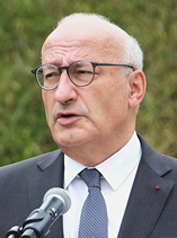 We are gathered here to pay tribute to Samuel Paty, the teacher who was murdered last Friday in a despicable attack.

The emotion we feel is immense, our thoughts go out to his family, his colleagues, his students, and to the entire education community.

As we speak, President Macron is honoring his memory at the Sorbonne, a monument that symbolizes the spirit of the Enlightenment, the cultural richness of our country.

Samuel Paty embodied this richness and the desire to pass it on. At age 47, he began teaching at the College du Bois de l’Aulne in Conflans-Sainte-Honorine. A few days before this tragedy, Mr. Paty gave a lesson on the freedom of expression, as he did every year, explaining to his students the tragic attack on Charlie Hebdo in January 2015. On October 16, Samuel Paty was killed because of his teaching, because he taught his students about the freedom of expression, because he wanted to nurture their own critical thinking.

Upon learning of this tragedy, we all thought about the teachers who marked our lives as children and young adults. The ones who helped us discover the world, who gave us the keys to knowledge, who taught us the republican values of liberty, equality, fraternity.

Yes, our Republic was built around its schools, on the foundation of its schools. Schools educate citizens. They shape freedom-loving men and women. Who fight ignorance, who learn to build a future, to look out for others, to accept their differences, our differences.

So there is nothing surprising about the enormous spontaneous tribute that our fellow citizens paid to Samuel Paty on Sunday.

As a symbol of our country’s gratitude, he will posthumously be named Chevalier of the Legion of Honor.

All of France’s schools will pay tribute to him on November 2.

A few days ago, in Les Mureaux, President Macron presented a strategy to combat separatism.

Central to our country’s “republican reawakening” is a reaffirmation of the importance of the Republic’s schools, from which we must draw all the consequences.

It is equally vital to reaffirm and explain the principle of secularism, which guarantees the freedom to believe or not to believe, the freedom to practice one’s faith, whatever that might be.

In our Republic, anyone can build a life, whatever his or her beliefs or origins.

Our teachers will remain essential guides on the path of tolerance and freedom, on which we will continue to move forward. Our country will mobilize all the resources of schools and state to ensure that they have the means to perform these duties that are so crucial to our nation’s future.

I would like to conclude with these words by the writer Paulo Coelho that say everything about the enormous role of the teacher: “Teaching is demonstrating that it is possible. Learning is making it possible for yourself.”