National tribute to the memory of Samuel Paty 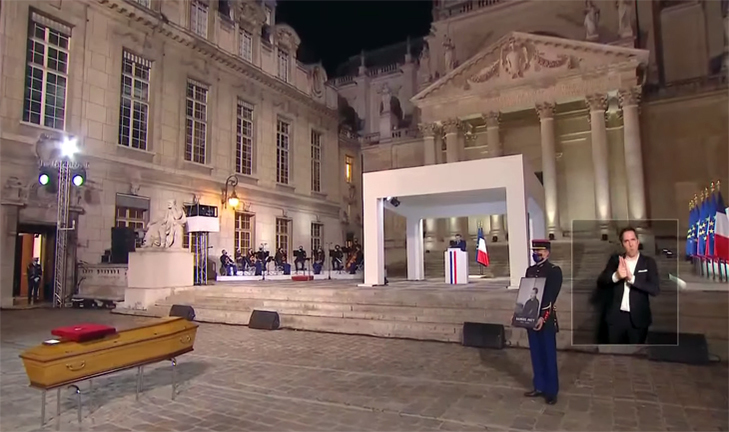 This evening I won’t speak about the fight against political, radical Islamism, which leads to terrorism. I’ve said what I had to say. I’ve given the evil a name. We’ve decided what action to take, we’ve made it tougher and will complete it.

This evening I won’t talk about the string of terrorists, their accomplices and all the cowards who committed this attack and made it possible. I won’t talk about those who have made us associate his name with barbarians; they don’t deserve it. They no longer even have names. This evening I won’t say any more about the vital unity all French people feel, which is invaluable and requires all leaders to express themselves appropriately and act rigorously. No.

More than anything else, Samuel Paty loved books, knowledge. His apartment was a library. His finest presents were books to learn from. He loved relaying to his students and loved ones a passion for knowledge and the taste of freedom through books. After studying history in Lyon and thinking of becoming a researcher, he took the path you, his parents – a primary school teacher and a headteacher in Moulins – mapped out, becoming an “educational researcher” as he liked to define himself, becoming a teacher. So what better place than the Sorbonne, our place of universal learning for over eight centuries, the place of humanism, for the nation to pay him this tribute.

Samuel Paty was passionate about teaching and did it so well in several collèges [1] and lycées [2], right up to the collège in Conflans-Sainte-Honorine. We all have firmly lodged in our hearts, our memories, a teacher who changed the course of our lives. You know, that primary school teacher who taught us to read, add up and have confidence in ourselves. The teacher who not only taught us a piece of knowledge but opened up a path for us through a book, through their attentiveness.

Samuel Paty was one of them, one of those teachers you don’t forget, one of those passionate people able to spend nights learning the history of religions so he could better understand his students and their beliefs. One of those humble people who questioned themselves a thousand times, as he did with the freedom of expression and freedom of conscience course he had been preparing in Moulins since July, at your side, and the doubts he shared because of his high standards and thoughtfulness.

Samuel Paty basically embodied the teacher Jaurès dreamed of in the letter to teachers, which has just been read out: “firmness combined with tenderness”. He who shows the greatness of thought teaches respect and shows what civilization is.

He who gave himself the task of “making republicans”.

So Ferdinand Buisson’s words echo back: “To make a republican,” he wrote, “it is necessary to give every human being, no matter how young or meek, the idea that he must think on his own, that he must be faithful or obedient to no one, that it is up to him to seek truth and not receive it ready-made from a teacher, guide or leader of any sort.” “Making republicans” was what Samuel Paty fought for.

And though this task today may seem titanic, especially where violence, intimidation and sometimes resignation take over, it’s more essential, more relevant than ever. Here in France, we love our nation, its geography, landscapes and history, its culture and metamorphoses, its spirit and heart. And we want to teach it to all our children.

Here in France, we love the project, both earthly and universal, promoted by the Republic, its order and its promises. Begin each day anew. So yes, in every school, in every collège, in every lycée, we’ll give teachers back the power to “make republicans,” restore their rightful position and authority. We’ll train them, we’ll esteem them as we should, we’ll support them, we’ll protect them as much as necessary. Inside and outside school, the pressures, the abuse of ignorance and obedience which some would like to establish have no place in our country. “I’d like my life and death to be of some use,” he once said. As if it were a premonition.

So why was Samuel killed? Why? On Friday evening, at first I believed it to be a random act of madness, a senseless arbitrary act: another victim of gratuitous terrorism. After all, he wasn’t the Islamists’ main target, he was simply teaching. He wasn’t an enemy of the religion they exploit: he had read the Koran, he respected his students whatever their beliefs and was interested in Muslim civilization.

No, on the contrary, that’s precisely why Samuel Paty was killed. Because he embodied the Republic which comes alive every day in classrooms, the freedom that is conveyed and perpetuated in schools.

Samuel Paty was killed because Islamists want our future and because they know that with quiet heroes like him, they will never have it. They divide the faithful and the unbelievers.

Samuel Paty only knew citizens, whereas they thrive on ignorance. He believed in knowledge. They cultivate hatred of the other. He always wanted to give them a human face, discover the richness of otherness.

Samuel Paty was the victim of a fatal conspiracy of folly, lies, conflation, hatred of the other, hatred of what we are deep down, existentially.

We will defend the freedom that you taught so well, and we will strongly proclaim the concept of laïcité [3] [secularism]. We will not disavow the cartoons, the drawings, even if others recoil. We will provide all the opportunities that the Republic owes all its young people, without any discrimination.

We will continue, sir. France’s schoolteachers primary and secondary school teachers will teach history – both its glories and its vicissitudes. We will help our students discover literature, music, all the works of the mind and soul. With all our strength, we will enjoy debate, reasonable arguments, friendly persuasion. We will love science and its controversies. Like you, we will cultivate tolerance. Like you, we will relentlessly seek to understand, and to gain an even better understanding of the things they’d like to take away from us. We will learn humor, distance. We will remember that our freedoms will endure only if we end hatred and violence, only if we respect others.

We will continue, sir. And throughout their lives, the hundreds of young people you educated will practice the critical thinking they learned from you. Perhaps some of them will also become teachers. And they will educate young citizens. They in turn will nurture love for the Republic. Links in a never-ending chain, they will increase understanding of our nation, our values and our Europe. 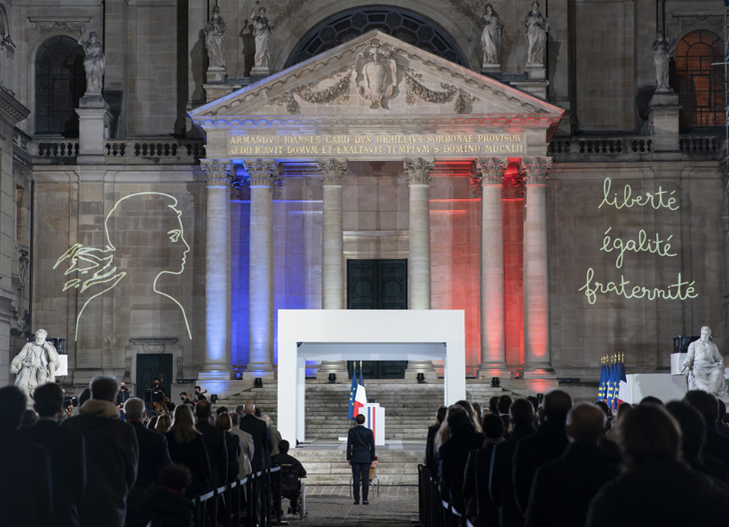