Communiqué from the Government (November 18, 2020)

The report takes stock of the implementation of the feminist diplomacy France has conducted since 2018 and proposes recommendations with a view to continuing and broadening this public policy. All France’s diplomatic actions contribute to defending and promoting, both on the international stage and domestically in the organization of the Ministry for Europe and Foreign Affairs, equality between women and men, which the French President made into a major national cause of the five-year term. This priority of the Government since 2017 will not be altered by the health and economic crisis, of which women are the first victims.

France’s feminist diplomacy, which is being rolled out in particular through France’s International Strategy for Gender Equality (2018-2022), promoted by the Ministry for Europe and Foreign Affairs, will be showcased in Paris in June 2021 at the Generation Equality Forum, organized by France and Mexico under the aegis of UN Women, which will be next year’s most significant international meeting on gender equality.

Since the launch of this strategy and as part of the feminist diplomacy promoted by France, substantial progress has been made. Our financial commitments to equality are being significantly stepped up:

Finally, on the gender parity front, the number of French women ambassadors has doubled in five years and the objective of having women make up 50% of first-time ambassadorial appointments should be achieved. Progress is also being made on training staff and raising their awareness about sexist behavior, and as part of its plan to raise awareness the Ministry for Europe and Foreign Affairs has set itself the aim of having 7,000 trained staff, i.e. 60% of staff posted abroad.

More than ever, we are resolved to forge ahead in every area of our action in order to improve these results and fully implement France’s feminist diplomacy./. 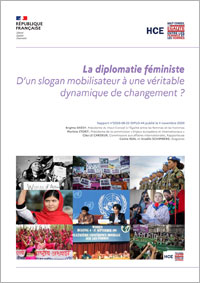