Find more publications
about the French economy at
frenchtreasuryintheus.org.

France and the United States:
A deep and mutually beneficial economic relationship

France and the United States, in addition to their strong relationship at the political level, have deep economic ties that are mutually beneficial. These trade and investment flows support growth, jobs and innovation in both countries.

1/ Trade in goods between the two countries reached $79 billion in 2018, up 2.6 % from 20171, according to Eurostat. The latest available data for both goods and services cover 2017, with a $139 billion total trade volume, of which $77 billion was for goods and $62 billion for services. In 2018, France was the 4th export destination and the 3rd trade partner for the U.S. among European countries. France’s trade surplus for goods reached $12 billion in 2018, close to twice its 2017 level according to Eurostat. This increase is notably due to the growth of French exports in chemical and pharmaceutical products (up $1.4 billion, mostly medication) and in machines and transportation equipment (up $3 billion, mostly ships and boats).

2/ Machines and transportation equipment accounted for close to half of goods exchanged. Trade flows between the two countries include all kinds of goods and services, which reflects the breadth of exchanges between the two economies. According to Eurostat data, the United States has a surplus for certain goods such as energy ($2.8 billion), whereas France has a surplus in wine and liquors ($3.7 billion), and pharmaceutical products ($3.3 billion).

3/ Every U.S. state participates in these trade flows, with differences that reflect their respective economic weight and industry specializations. California is the main exporter of goods to France, followed by Texas, notably as a result of its energy industry, whereas New York state and New Jersey are the main importers of goods from France. Similarly, the regions of Ile-de-France (Paris region), Auvergne-Rhône-Alpes (Lyon region) and Occitanie (southwest) are particularly involved in this relationship – the last due to its aeronautics industry. 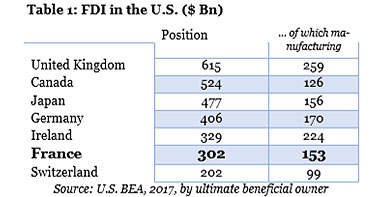 5/ A large number of jobs depend on this bilateral investment relationship. There are 4,800 French subsidiaries in the U.S. (according to Orbis) employing 728,500 people in total, according to BEA’s latest data covering 2016, making France the 3rd foreign source of jobs in the U.S. In 2017, French FDI created an extra 47,500 jobs in the U.S. (source: BEA). Conversely, the 4,600 U.S. affiliated firms in France employed 481,000 people (source: BEA) making them the largest foreign source of jobs in France. 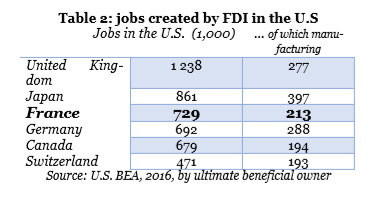 7/ The positive impacts of these FDI flows are distributed all over the U.S. The states of California, New York and Texas attract both the largest percentage of French FDI as well as the most jobcreating FDI, as a result of their economic importance. However, all U.S. states benefit from this investment relationship, as shown in the map below. Similarly, all French regions benefit from U.S. FDI. 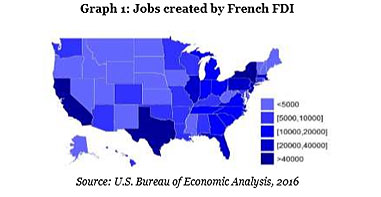 8/ American and French subsidiaries are of key importance to each country’s exports. French-affiliated firms in the U.S. export $26 billion in goods to third countries every year (source: BEA). Similarly, American subsidiaries in France benefit from an unrivalled access to European and African markets, and export approximately $40 billion to these regions annually. According to the Kantar Public research institute, 88 % of foreign firms based in France consider France as a key export hub to Europe and Africa and 93 % export to those markets.

A RELATIONSHIP GEARED FOR INNOVATION

10/ Industrial partnerships in technologically intensive fields. French companies are historically very present in U.S. high-technology fields, such as defense, security and biometry, as well as advanced manufacturing. Conversely, in 2017, 28 % of U.S. investment projects in France were in high-tech sectors, and the U.S. accounted for 35 % of investments in this field. In 2018, several major U.S. tech companies announced they would open their European research hubs in France in the fields of artificial intelligence and cybersecurity. According to the American Chamber of Commerce in France, 92 % of American investors consider France to be an attractive destination in the digital sector.

1 There are some variations on France-U.S. trade data between the U.S. Census Bureau and French Customs. For the part of the report covering the whole U.S. territory, we have chosen to use data coming from Eurostat, the European Union’s statistical office. It offers a harmonized set of data on E.U.-U.S. for each Member State that mitigates methodological variation and quasi-transit effect. However, for state-by-state trade with France and France’s sub-regional trade, we use respectively U.S. Census Bureau and French Customs data, as they are the sole sources for these figures.