While serving the French crown in 1524, Giovanni da Verrazzano, originally of Italian descent, explored North America in search of a route to the Pacific Ocean. Later in 1534, Jacques Cartier explored the St. Lawrence River and claimed the area for France. In the early 1600s, French explorer Samuel de Champlain traveled through and mapped the Great Lakes, while Father Jacques Marquette founded a Jesuit mission called Sault Ste. Marie, in present-day Michigan.

France joined the American revolutionary forces in 1778. During the time of the American Revolution, Admiral Jean-Baptiste Donatien de Vimeur, Comte de Rochambeau – also known simply as Admiral Rochambeau – joined the Continental Army under General George Washington. Rochambeau’s troops marched from Newport, Rhode Island, to Yorktown, Virginia, with the Continental Army and fought alongside them in the Battle of Yorktown. Gilbert du Motier, Marquis de Lafayette was a nobleman who served as an aide to General Washington at Valley Forge and used his own money to support the revolution. François Joseph Paul de Grasse, Comte de Grasse brought French reinforcements that were decisive in the Battle of the Chesapeake in 1781. His reinforcements also proved to be decisive in the Battle of Yorktown, which effectively ended the Revolutionary War.

After the British Army surrendered, negotiations ended with the signing of the Treaty of Paris on October 19, 1783. In 1824, Marquis de Lafayette became the first foreign dignitary to address a joint session of Congress. His portrait currently hangs in the chamber of the House of Representatives. A statue of Admiral Rochambeau, a gift from France to President Theodore Roosevelt in 1912, stands today in Washington, D.C.

The Louisiana Purchase of 1803 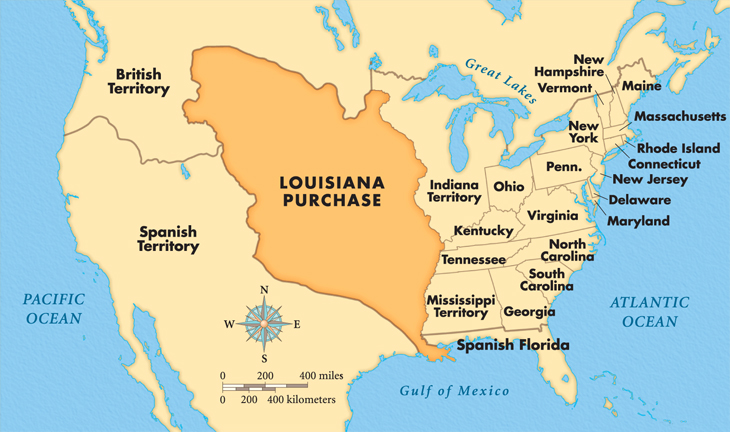 In 1803, the United States acquired the Louisiana Purchase from France. At a cost of $15 million, the new land nearly doubled the size of the country.

The U.S. and France Work Together Toward the Common Goal of Peace

In 1917, the United States joined the France and the Allied Powers in World War I, bringing much-needed reinforcements in the fight against the Central Powers. After the Allied victory in 1918, President Woodrow Wilson set forth his Fourteen Point peace plan in a speech before Congress, urging freedom of the seas, arms reduction, and international cooperation.

Operation Neptune, widely known as D-Day, was the Allied invasion of Nazi-occupied France. On June 6, 1944, the Allies launched the largest-scale amphibious attack in history, storming the beaches of Normandy early in the morning. Led by General Dwight Eisenhower with the help of General Charles de Gaulle, the Allies executed the invasion with the ultimate goal of liberating France.

In the aftermath of World War II, the United States launched the Marshall Plan, a multilateral plan to economically and politically rebuild the devastated Europe. The Truman Doctrine, a policy implemented by President Harry Truman, formalized the plan. Between 1947 and 1951, France and other war-torn countries received nearly $13 billion in recovery funds.

On March 19, 1956, France began allocating plots of land for the establishment permanent military cemeteries and war memorials, including the construction of numerous cemeteries for foreign soldiers. These cemeteries attract many tourists to Normandy each year. A list of cemeteries for American soldiers in France can be found on the website of the American Embassy in Paris.

Following the events of September 11, 2001, France sent troops to Afghanistan within the context of a NATO coalition. France committed 3,850 men to the NATO-led International Security Assistance Force (ISAF). France has spend upwards of €850 million on the war in Afghanistan. In July 2011, France announced the withdrawal of its troops following President Barack Obama’s announcement earlier that month of U.S. troop drawbacks.

That same month, French Ambassador to the United States, François Delattre, bestowed the French Cross of Military Valor on six U.S. Special Forces soldiers in recognition of their heroism while fighting alongside French troops.

France was the first country to conduct military strikes against Col. Muammar Qaddafi’s forces, as well as the first country to recognize the National Transitional Council as the legitimate Libyan government. In March 2011, the United States, France, and Great Britain coordinated attacks within the framework of United Nations Security Council Resolution 1973. France and the United States both support transition to democracy in Libya and seek to help restore the country.

In 2013, France and the United States continued to cooperate closely across a broad range of issues. France’s intervention in Mali beginning in January 2013 was joined by material and logistical support from the U.S. military. Both countries continued to work toward solutions on the international security issues of Syria and Iran. In economics, France and the United States worked together bilaterally and multilaterally to promote growth and job creation, notably at the G20 meetings in June and September.

On February 11, 2014, at the invitation of U.S. President Barack Obama, French President François Hollande will make a State visit to the United States. The Heads of State will discuss opportunities to further strengthen the French-American security and economic partnership.