Substantive discussion between French Foreign Minister Jean-Yves Le Drian and U.S. Secretary of State Mike Pompeo on the sidelines of the Global Coalition against Daesh/ISIS. Washington, November 14, 2019 France is the 2nd largest contributor in the coalition after the U.S. We are determined & united together to keep up the fight. 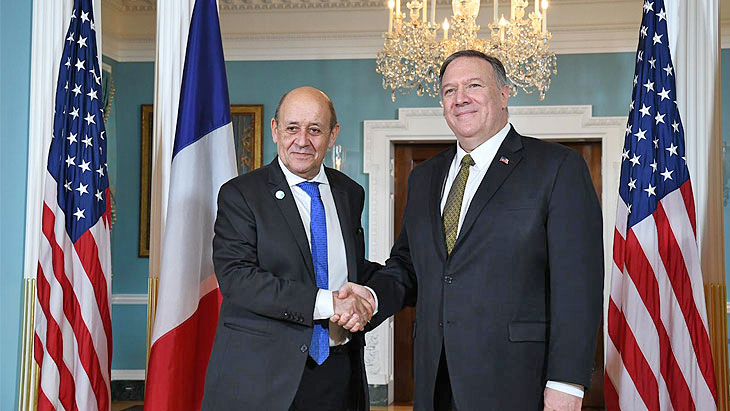 France enjoys a positive image in the United States.

The United States is one of France’s major allies and our cooperation is particularly strong in efforts to counter terrorism. France and the United States provides significant support to Operation Barkhane in the Sahel region, estimated at €35 million a year. The quality of the French armed forces is recognized by the Trump Administration, which appreciates their involvement in several foreign theatres. French-American relations enable quality dialogue on issues where consensus is sometimes lacking, such as when it comes to tackling climate change.

Large-scale ceremonies to commemorate the long-standing alliance of our two countries were held in recent years, with the commemoration on July 14, 2017 of the centenary of the United States’ entry into World War One, with Donald Trump in attendance. On 11 November 2018, President Trump visited Paris to commemorate the 100th anniversary of the end of the World War One. President Trump visited France for a third time for the 75th anniversary of the Normandy Landings on June 6, 2019. A large delegation from Congress was also present on this occasion.

From April 23 to 25, 2018, the President of the French Republic made his first State visit to the United States since the election of Donald Trump. That invitation reflected the depth of the historical ties between the two countries as friends and allies.

At parliamentary level, a friendship group – the French Caucus, created in the U.S. Congress in 2003 and made up of around one hundred members – is a key instrument of France-USA relations. Similarly, there are France-US friendship groups in the French National Assembly and Senate.